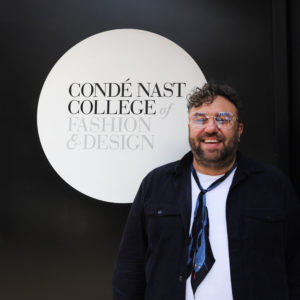 International hairstylist and host of podcast, ‘In bed with Neil Moodie’ visits the Condé Nast College London for a special ‘in conversation with former Vogue beauty editor, Anna-Marie Solowij as part of the weekly industry speaker series. Megan McClelland reports…

Moodie is an international hairstylist with over 50 iconic Vogue covers under his belt, but that’s not all. He’s also launched his own hair products and he’s also the host of one of Apple’s Top 20 podcasts: In Bed With Neil Moodie, where he interviews key figures working in the hair and beauty industry about their work. Moodie also has a successful YouTube channel where you can currently see his series ‘Alphabet of Hair’.

Moodie’s talk at CNC put him in the hot seat for once with Anna-Marie Solowij, the former beauty editor of British Vogue and long time friend of Moodie putting the shoe on the other foot and interviewing him in front of the students to discuss how he has carved out a career for himself in the industry.

“You’re Only as Good as Your Last Haircut”

A true virtuoso, Moodie’s break into the business was spontaneous and a bit unconventional. He was called onto the set of a photo shoot for The Face magazine with Corrine Day, so he called in sick to Toni & Guy where he worked as a Hair Colourist in order to take the gig. From then on  he went on to work on editorial projects for Vogue Italia and Miu Miu. While listening to Moodie share his story, it was clear that no matter how much he grew as an artist, his work ethic and personal philosophy remained the same: always do better the next time. Focusing on consistent improvement over perfection as a way to monitor personal growth.

Moodie’s career has been influenced by the friendships he’s formed over the years. Interpersonal skills played an integral role in his professional life from his job at Toni & Guy to where he is today. Doing other people’s hair fostered intimate moments between him and strangers,  who ended up becoming close friends as time progressed. Holding conversations with others became the touchpoint for the evolution of his career onward. Since then, Moodie has opened up on mental health issues for Man Talk and interviewed colleagues for his podcast as well.

Turning Creativity Into a Career

Creativity has been a mainstay in Moodie’s life. From his first day on Corrine Day’s shoot for The Face in 1994 to working with Day on a portrait of Kate Moss for the National Portrait Gallery’s permanent collection in 2007. In the interim, he’d worked on projects, like “Iconic Heads,” and became one of the beauty editors at Wonderland magazine. Admittedly, he  always wanted people to either hate or love his work and that wanting to evoke an emotional response from others pushed him to stand out and go against the grain. At the end of the day, he accredits his success to the “life-enhancing” nature of his job. Providing a service for others and minding the larger picture when dealing with the task at hand are lessons we can all apply to our craft.