Print! Tearing it Up at Somerset House 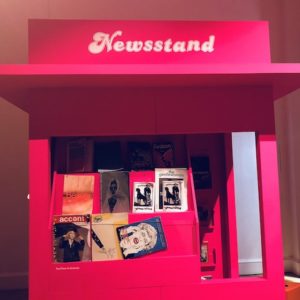 At Somerset house, an exhibition of independent print media celebrates the iconic past, electrifying present and promising future of independent magazines.

We are all aware of the seductive power of a magazine. Leafing through glossy pages and being captivated by the harmony of composition and copy. “Whether a call to action, a glimpse of a different kind of life, or an alternative point of view – the magazine’s ability to pull you in and absorb you into its world is a powerful one indeed,” says Claire Catterall, senior curator at Somerset House. It’s an experience that fast paced, bite-size digital content can’t match.

Perhaps it isn’t a big shock that print, although somewhat reduced, continues to keep us engaged in a time where technology and digital consumption has grown exponentially.

Print! Tearing It Up takes us through a series of themed areas, which tackle a range of diverse subjects, with activism, satire and dissent at its core. With inspirations drawn from the “iconoclasts of the twentieth century” – from Blast at the start of World War One and the underground lifestyle magazines which emerged in British media from the 60s to the 00s, to modern, pop-culture icons including The Face and i-D.

And now a new generation of indy magazine editors, including Liv Little of Gal-Dem, are paving their own way too, rejecting the mainstream for an outlet that offers something more creative and personal, but still flows and complements the pace and presence of the online world.

Featuring selected artefacts from the personal collection of exhibition curator Paul Gorman, the show illustrates how these magazines are not just pop culture artefacts – they are a historical resource too, recording events, opinions and viewpoints as they happen – a primary source for those who seek to understand the sign of the times.

Print! Tear It Up is a celebration of the resurgence of independent print titles in a digital era, as well as the recent history of independent magazine publishing in Britain. It shows the force and power that “concerns for art, social activism and dissent” can create to direct change. As we move into a time when minority voices are heard, perhaps it’s the new-gen of independent publications that can document the revolutionary social change of our time, solidifying movements and giving them a voice – in print.