Maurice Mullen on his role as the Head of Fashion & Luxury at The Evening Standard, and its meaning post pandemic 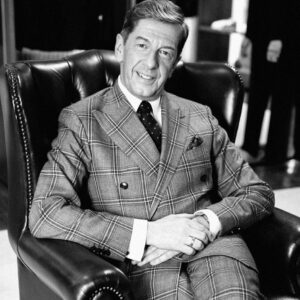 Condé Nast College recently welcomed Maurice Mullen, Head of Fashion & Luxury Goods at The Evening Standard, who spoke to students about his career trajectory and the ever – evolving definition of luxury as we navigate the new normal.  MA Fashion Journalism student, Manic Pathak reports …

Seated in his office on a bright Wednesday afternoon, in a white club collared shirt and a black suit, Maurice Mullen, Head of Fashion & Luxury Goods at The Evening Standard spoke to the Condé Nast College students. A very important figure in the realm of fashion publishing, Maurice also elaborated on the current meaning of luxury and the future of fashion journalism in the wake of the pandemic.

Role as the Head of Fashion & Luxury Goods

“There is no day that’s the same”, Maurice perfectly summarises his daily to-dos which involves sifting through at least a hundred pitches. His role also entails face-to-face interactions that the tactile nature of fashion demands. Briefly describing the press day he had attended earlier that day, Maurice explained the importance of PR events for the publication.

Maurice also talked about the importance of his role in liaising between the commercial and editorial teams to facilitate a smooth functioning relationship between the two departments. Advances in digital media have created a bridge between the two teams due to the removal of cover prices.

Ultimately, advertisements are the core source of revenue and publications need to maintain a close relationship with those brands that want to invest.

In 1999 Maurice joined the British Fashion Council (BFC) on the Executive Board and presently sits on the Advisory Board of the BFC. The partnership between the Evening Standard and the BFC encourages young, new talents. The Evening Standard has a significant readership and Maurice likes to call them ‘Design Literates’.

He says,’ ‘We produce half a million Evening Standards every working day and 200,000 Evening Standard magazines and have a considerable number of unique users on The Standard’s digital platform”. This is a typical sophisticated London audience who are very well acquainted with designer names.

With the fashion world approaching the state of circular and ethical design Maurice believes in keeping with the times and speaking to their educated audiences. The Standard opens a new window to the upcoming designers working their way through sustainability and diversity.

The perspective of luxury

Maurice defines the term as ‘wearable’ luxury from the viewpoint of his role at The Evening Standard. He says, “By ‘wearable’ luxury I mean watches, jewellery, accessories, belts, bags, luggage; anything you can carry’. Reminiscing about the time when he had written a column for Wattswhat magazine, he believes luxury is synonymous with ‘craftsmanship’, and from a consumer point of view, it is ‘connoisseurship’. The idea of luxury also embodies the persona of consumers who know what they want, assimilating a sense of their unique style.

The aftermath of the pandemic has reassembled the meaning of luxury. Maurice elaborates, “people’s perception of what is luxury is not just in physical items anymore, it is about having a family around you, good health and having the time to appreciate that.”

Maurice’s humour brightens the conversation as he explains that the pandemic has cemented the real meaning behind “aligning your chakra”. In hindsight, the true meaning of luxury is to feel at peace within the comforts of your couch, flipping through the pages of your favourite magazine.

Maurice explains the time when fashion bodies that ran the fashion weeks were “intimidatingly exclusive”. The exclusivity and the hierarchy also divided people in terms of first and last row spectators of the shows. Today, digital fashion shows have blurred the lines of exclusivity and also democratised fashion and brought it to a much more diverse set of audiences. This also came as a realisation that many people are interested in fashion and the desire to know what’s coming next season.

Key takeaways from the future of fashion journalism

Why studying a Masters Degree is good for your job prospects