How fashion has supported the conversation around mental health 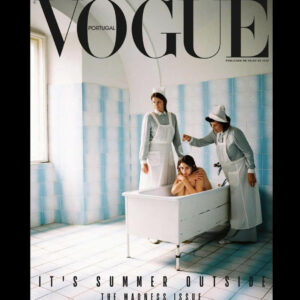 Today, 10th September 2021, marks world suicide prevention day – a day designed for people to come together and raise awareness of how fewer lives can be lost to suicide. This year the theme around the day is centred on ‘creating hope through action’. Condé Nast College reflects on how the fashion industry has supported and promoted the importance of prioritising positive mental health.

From charitable donations, to the de-stigmatisation of mental health on the runway; the fashion industry has been at the fore of carving a new path in the way mental health is presented in the mainstream media. The importance of the conversation improving mental health and suicide prevention has never been so pertinent. A mental health crisis has been the silent by-product of the Covid-19 pandemic. The Office for National Statistics conducted a study which revealed that 1 in 5 adults in Britain experience a form of depression within the first three months of 2021, with young people aged 16-24 the most susceptible to poor mental health symptoms – with the main factors contributing to this rise is feelings of loneliness and isolation.

Suicide Prevention Day was first noted in 2003 by the International Association for Suicide Prevention (IASP) which was founded in 1960, by Professor Erwin Ringel and Dr Norman Faberlow, and co-sponsored by the World Health Organisation (WHO). Here is a round-up of four initiatives spearheaded by the fashion industry to shine a spotlight on the importance of visibility around talking about mental health.

Fashion publications have never shied away from providing the platform for authentic conversations around mental health. In May this year Vogue launched a four part series entitled ‘Opened Minded’, a conversation between Kendall Jenner and Dr. Ramani Durvasula, discussing her own experience and navigation of anxiety – a disorder which is estimated to affect 275 million people globally. The supermodel, CEO and Creative Director spoke about how  she “remembers being really young and having shortness of breath.” This open, candid approach is important to normalise the conversation around mental health.

British Model, Vogue Cover star and founder of platform ‘Gurls Talk’ Adwoa Aboah, has used her influence and online presence to create a platform based on her own experience of suicidal ideation to create a community for girls to share their own, individual experience, have frank open conversations and feel less alone. Gurls Talk provides resources and a safe space for young women and girls to discuss a range of topics, which are often considered taboo and off limits. From sexuality, to depression, self-care, body image and quite frankly anything that may be affecting young people today.

The power of an image is undeniable and Vogue Portugal affirmed this with one of their four covers for their Madness Issue in July 2020, which featured a woman in a bathtub being washed by two nurses, in what seems to be an institutional setting. Despite claims of the cover being considered to be unethical, Vogue Portugal defended it explaining how they wanted to “shine a light” on the important topic of mental health, with the purpose of the cover to “start a conversation”. Fashion has the unique capability to provide a neutral platform to present ideas that would otherwise be undiscussed by certain audiences.

So often a contributing factor to poor mental health is the perceived reality of other people’s lives in comparison to our own, which is presented through social media platforms. This is shown by a survey conducted by the Mental Health Foundation that revealed “40% of young people (26% of boys and 54% of girls) said that images on social media have caused them to worry in relation to their body image”. Urban Sophistication is an Israeli based, lifestyle label that produces a range of accessories that capture the zeitgeist of today. In partnership with Maybelline to support this year’s Mental Health Awareness Month, they launched a custom iPhone case and makeup bundles to remind consumers that social media does not define beauty standards. 100% of the proceeds from this collection go to the Jed Foundation – a non-profit organisation whose work protects emotional health and prevents suicide amongst teens and young adults.

Why studying a Masters Degree is good for your job prospects