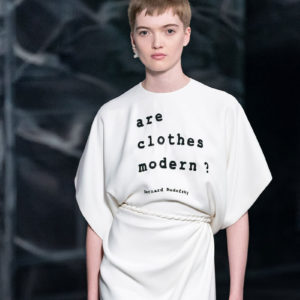 Christian Dior always called himself an “architect-couturier,” as he was known for introducing bold, shape-shifting women’s silhouettes in the 1940s. On the first of July, Maria Grazia Chiuri, Dior’s current Creative Director of Dior, exhibited her mysteriously dark and moody autumn couture collection at the brand’s elegant headquarters at 30 Avenue Montaigne.

For the show, feminist artist Penny Slinger created a stage setting by transforming the location into an enchanting tribute to the elements. ⁠ Nature was brought indoors in a bewitching way, with large tree trunks taking up most of the space.

Architecture was the main source of inspiration for Chiuri as she referenced the world of Austrian-American architect Bernard Rudofsky, to deliver a hauntingly beautiful show. The collection was almost entirely black as the best foundation for displaying the art of construction and cut and took the audience back to the starting point of haute couture, defying it against contemporary lifestyles. Adding softness were light tulles and gauzes, with artisanal finishes ranging from dégradé netting to velvet scrolls. And through it all, Chiuri echoed the house founder’s own influences: “I wanted to be an architect; as a designer, I am obliged to abide by the laws and principles of architecture,” said Christian Dior.