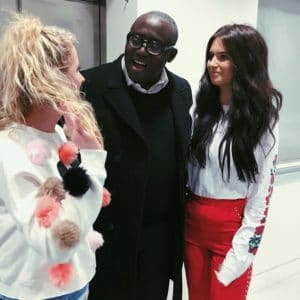 How Edward Enninful captured a true definition of Britishness through the cover of a magazine.

A picture (in this case cover) speaks a thousand words and British Vogue covers under British Vogue Editor-in-Chief, Edward Enninful have a clear message to share: diversity of perspective, inclusivity, and presenting the very best of British. BA (Hons) Fashion Communication student Alice Morey investigates how the Vogue cover has reclaimed our understanding of Britishness and promotes cultural debates happening within society. Advocating greater representation of BAME British people through covers which demonstrates that a greater reflection of representation is not isolated to the fashion industry but is an industry-wide problem.

Edward Enninful embarked on his tenure as the eleventh Editor-in-Chief of British Vogue at the end of 2017 – during a notoriously tense political period in Britain, characterised by Brexit. Three years into his editorship, he is navigating the sociological effects of the coronavirus pandemic and the dismantling of systemic racism brought to height in June 2020 by the death of George Floyd and the Black Lives Matter movement. Enninful entered his editorship with a clear prerogative for diversity in taking over a magazine that had become synonymous with a white upper-class readership. Now more than ever there is a pressing need for change. Demonstrated by Enninful himself, being directed to the loading bay and not to his office as he entered his place of work in mid-July 2020.

Britishness is a complex and ambiguous term to define; under Enninful, Vogue defines Britishness as a value set that projects the solution to providing a truer, more meaningful representation of Britain. This moves away from a diversity deficit informed by a historic colonial past. The apathy and dissonance from the public towards a label of ‘Britishness’ allows Enninful to carve out his vision of what it means to be British through the lens of British Vogue, with a clear mandate and prerogative for diversity and inclusivity, coupled with a romanticised version of Britain. This creates unity and a hook for the content to sit upon which unites the ‘Old’ Vogue with the ‘New’ Vogue readership.

New Frontier – The Models Changing the Face of Fashion

Underrepresentation is not an issue isolated to the fashion industry, and through the May 2018 issue ‘New Frontier -The Models changing the face of fashion’, a gatefold cover photographed by Craig McDean featuring nine models which Enninful states in the accompanying editor’s letter “defines everything we stand for as a magazine in 2018”, showed diversity was at the fore of the shoot.

The staging of the cover is interesting and reflective of the ‘Hollywood Reporter’, presenting a plethora of award winners. The film industry and associated award ceremonies have come under scrutiny for being ‘whitewashed’ and resulted in the formation of the 2015 social justice campaign #OscarsSoWhite after the academy awarded all 20 acting nominations to white actors across two consecutive years; showing a disparity where 92% of top film directors were men and 86% of top films featured white actors. The campaign aimed to call out a diversity deficit and by Enninful staging an image in this way it highlights that the lack of diverse representation extends outside the fashion industry, showing the scale of the problem.

This cover image presents a proposed image of how the industry could look and a standard to strive for; featuring Halima Aden and Adut Akech both born in the same refugee camp in Kenya and are both considered to be supermodels of today. With Aden being the first model to wear a hijab and burkini on the cover of ‘Sports Illustrated’ magazine in 2016 and Akech winning the ‘Model of the Year’ award by the British Fashion Council in 2019. This image is a metaphor for our new understanding, and make-up, of what reflects Britishness today. Britain is no longer a whitewashed nation where culture is entrenched and passed down to generations. Britain has a rich tapestry of tradition and new connections that have been brought into the nation.

What would the September issue of Vogue look like if Gen Z were in charge?

The use of the Union Jack

The Union Jack is a symbol that has a controversial and complex origin. Historically a symbol of patriotic pride for people to unite under and identify their nationhood with. In a post-modernist time, the St. George’s flag and now the Union Jack have evolved to symbolise attachment to far-right political movements. A harmful negative association towards a flag permeates into mass opinion presenting a challenge for Vogue. How do you create a visual attachment to a national identity, to solidify brand identity and point of difference from other international issues of Vogue? Without portraying a negative association or perceived promotion towards marginalised political parties.

For the June 2018 issue entitled ‘A Modern Romance’, Cara Delevingne is photographed by Steven Meisel in a wedding dress, in tribute to the real-life marriage of the moment between the Duke and Duchess of Sussex. The cover sought to evoke patriotic feelings through the colours utilised, the red of the coverlines and title, juxtaposed by the stark white of the background, hat, and white of Delevingne’s eye. Brought together by the blue of her iris, which mimics the colours of the Union Jack; however, this is a subtle use of symbolism which evokes pride for the nation, revamped for the then-modern time of 2018.

This modernisation is mirrored by the Royal Family, where previous negative connotations of being rigid and stuffy were reinvigorated through the marriage of a member of an aristocratic royal blooded prince and his bi-racial LA-based actress bride. The cover goes further to celebrate the change of traditional institutions through the casting of Delevingne as a cover star. This promotes a modern version of marriage. As an openly proud pansexual woman, Vogue is celebrating all forms of love. Although gay marriage was legalised in the UK in 2014, the release of the Government Equalities Office LGBT Action Plan 2018, revealed that “two-thirds of respondents said they had avoided holding their same-sex partner’s hand in public for fear of a negative reaction”. Placing Delevingne on the prominent souvenir cover presented clear strong support for de-stigmatisation of LGBTQ+ relationships and moved Enninful’s Vogue away from a stuffy and conservative vision of ‘Old Vogue’; whilst pledging evidence towards the support for the new diversity agenda.

Britain has a rich tapestry of tradition and new connotations that have been brought into the nation.

Globalisation as a concept holds intrinsic importance in how immigration has shaped the British labour market and significance in redefining Britain. New Vogue celebrates immigration as a pillar of Britishness and has become an integral part of promoting a new standard of representation. Setting a precedent for diversity first and representing what it truly means to be British in 2020.

The Importance of Getting Dressed