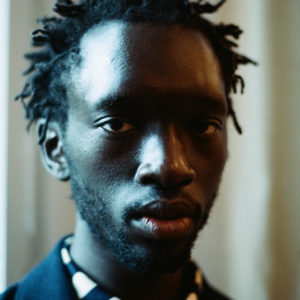 At the start of this month, the Condé Nast College was delighted to welcome Wilson Oryema, artist, writer, and  co-founder of social change initiative Regenerative Futures, and Surface Tension, a platform centred around the positive potential of materials, to the virtual lecture room to talk with students.

Wilson Oryema is a multifaceted artist, writer, poet, and sustainability activist based in London. He started his career in the fashion industry when he was scouted as a model and his first job was walking in the Maison Martin Margiela Show in 2014. Since then Wilson has worked for Versace, Calvin Klein, Stella McCartney and Timberland, to name a few.

Growing up, Wilson realised that his mental well-being was connected with issues related to harmful impacts on the environment, which is why most of his works revolve around human consumption and its effects on the environment. Selflessness, inspiration, and risk-taking have been the key elements in his voyage towards addressing environmental issues.

Since 2016, Wilson has been exploring different mediums like photography, poetry and film to communicate his work. Amongst his most noted works are his books Wait and Haha that are a compilation of short stories and poems released in 2017 and 2019 respectively; they dwell on the topic of contemporary consumption and its effects.

Curiosity has inspired Oryema’s works where he explains that his journey has been a constant rendezvous with trial and errors. He believes in leveraging one’s position and giving back to the space that one has benefitted from and strives to address the silence with a personal touch that sparks conversations around serious environmental topics.

A calling for Sustainability and Human Consumption

The ongoing documentation of Wilson’s works has led him to serve as a frequent collaborator with various organisations and publications as well. He has partnered with strategic sustainable consultants like Eco-Age where he has contributed as a writer. He has also collaborated with North Face Japan where he contributed some of his poems and photographs concerning their first mass-produced jacket made from synthetic spider silk in partnership with Spiber.

In 2019, Wilson collaborated with Swarovski on the launch of their Conscious Design Program in partnership with Central Saint Martins. This has helped him expand his horizons and learn from various people and move forward with a few of his own ventures.

“Too often we feel like passengers in a bus ride or a car journey who are just being led around from stop to stop and quite often we look up or look outside and feel that there is so much going around us and we don’t have any control”.

Wilson further addresses how Intergenerational gaps have wreaked havoc. Young people demand accountability from those in power who they believe are unreliable. To bridge this gap, he co-founded Regenerative Futures, launching a four-year social change initiative to facilitate intergenerational conversation and collaboration to move closer to an equitable and sustainable future. The project focuses on unifying hundreds of passionate young innovators in the field of sustainability with the leaders of the industry across various platforms such as fashion, architecture, food, beauty, and social causes.

Regenerative Future identifies as a fictional world that has virtually documented the scopes of sustainability in the future. Collectively, they speak to focus groups to get their outlook on the future world. It encourages accountability and conscious consumerism enabling people to think beyond what’s possible and steer their way from transitioning their beliefs into actions. Wilson says, “too often we feel like passengers in a bus ride or a car journey who are just being led around from stop to stop and quite often we look up or look outside and feel that there is so much going around us and we don’t have any control”.

Wilson also co-founded the digital exhibition platform Surface Tension in collaboration with Rosie Broadhead, designer, and researcher.  The platform serves to realise the amalgamation of the human body and nature. It exists to understand the potential materials can have on the human body accompanied by positive impacts without harming the environment. The exhibition is due to go live by the second week of March 2021 presenting works from various exhibitors with varied backgrounds and disciplines.  Exhibitors have submitted garments materials or objects with the idea of something that can be beneficial for the body and the environment equally.

The essence of Wilson’s talk reflects his endeavours to strike a chord between generational awareness through strong advocacy on environmental issues alongside sustainability in fashion. The key is to closely address things that one cares about and making it a two-way street.