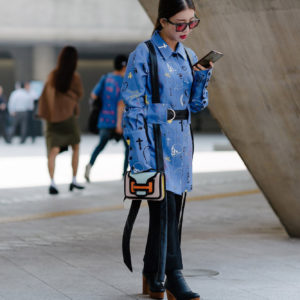 Seoul has been the Asian hub for cosmetics, beauty products and pop music for the last decade. Though in recent years, the South Korean capital has been focusing on its upcoming fashion industry talents and with great results, as fashion gurus from across the globe flee to the bi-annual Seoul Fashion Week to view its unique collections.

Jung Ku-ho, the executive director of Henra Seoul Fashion Week, states that the particular characteristic of Seoul Fashion Week are the adoptive elements from street style and music. There is a general effort to turn street fashion into high-quality work.

As the executive director points out the growing popularity of Seoul Fashion Week among fashion gurus, as Mario Dell’Oglio, Simon Collins as well as a variety of luxury brands, part of his marketing strategy is to pick the 10 best local designers every year and send them out to open pop-ups stores in luxury department stores in London, Paris, and Milan.

Also within the digital sphere are some powerful new Korean voices – the fashion blogger and entrepreneur, Chriselle Lim, just received the Bloglovin Blogger of the Year Award during New York Fashion Week. Aimee Song, who is the founder of Song of Style and who has 4 million followers on Instagram, just released her book on how to achieve the perfect Instagram feed. The Korean model, Irene Kim, has been named the new Alexa Chung ‘It’ girl, as her influence in fashion reaches a global audience.

The street style of Seoul is unlike any other, which may be part of the reason why the city has recently reached its recognition in the fashion industry. As Vogue.com puts it:

It will be interesting to see the impact that Seoul has on the wider fashion industry for the upcoming seasons, both by its street style and collections. The Neo-punk influence spotted on the streets of Seoul could certainly contribute to the revival of punk as a trend for 2017, and perhaps, it won’t be long before we see matching couple outfits in the streets of London.