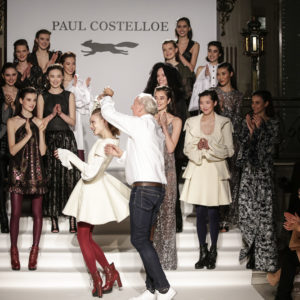 Paul Costelloe is one of the most established names in British and Irish fashion. The house has been a leader in the use of handcrafted, luxurious fabrics combined with cutting edge design, innovation and creativity. I got to have a quick chat with Paul Costelloe backstage after his Autumn/Winter 2017 catwalk show held at the Waldorf Hilton during London Fashion Week.

Paul Costelloe began his path in the fashion industry at the Chambre Syndicale de la Haute Couture in Paris, and has throughout his career designed for Jacques Esterel, La Rinascente and Anne Fogarty, before establishing his label, Paul Costelloe Collections.

I was excited to be invited to such a prestigious show, and as the doors to the Waldorf sprung open, and everyone was handed a glass of champagne, I could immediately sense why this particular location had been chosen to showcase the collection. The Edwardian building located in the center of West End complimented Costelloe’s elegant, romantic and theatrical brand perfectly. 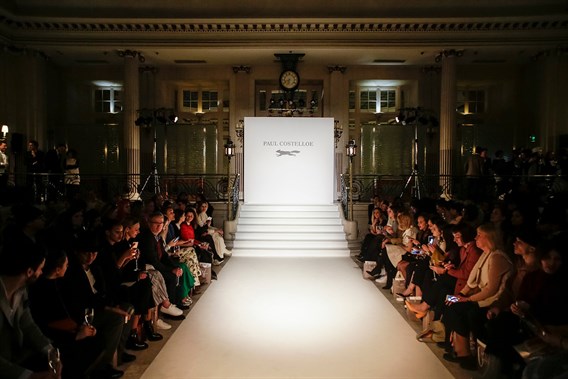 As the lights dimmed and the show began, it was evident to see the multicultural heritage of Paul Costelloe, as the materials and textures varied – from traditional to provocative. Paul Costelloe himself came to the catwalk to say his thanks during the finale, but instead of shying away as many designers do, Costelloe took one of the models for a swing in the middle of the runway, which made the room clap and cheer even louder. 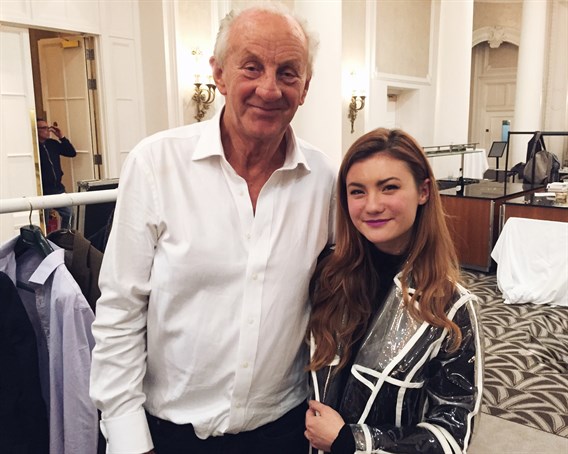 The humanity was there – in his designs and personality – and his dance on the catwalk was what made him instantly memorable and intriguing, which made press, business partners and family gather around him like a magnet backstage after the show came to an end. It was clear to see why – Costelloe greeted them all with a smile and chit-chat, like everyone around him was a part of the Costelloe family.

Congratulations on the beautiful collection! What were some of the highlights from tonight’s show?

I am particularly satisfied with the way that the AW17 collection was expressed on the catwalk. There were a number of materials; all expressed at one moment. The collection is Shakesperian, theatrical, and it got that experience onto the catwalk, without becoming too costumey, or formal. I kept it young, I kept it fun, and yet it was more or less taking 16th-century dress code into the 21st century, without becoming too heavy and opinionated.

Could you tell us about the ideas process that went into creating the collection?

The inspiration was very much to capture the hood. Everybody in the 16th century wore a hood to cover their face, but I brought it into a more glamourous place, by combining the hood with cotton blouses and long dresses. Very much taking inspiration from tales like Robin Hood and Little Red Riding Hood.

The whole collection is taking costume design into fashion, making it suitable for people to wear down the King’s Road, Sloane Square and Soho.

Most of all, it was important for me to keep it fun and make people go “that’s interesting!”

Could you tell us about how you adjust to the changes that we see in the industry at the moment, with fashion season taking a turn towards ‘See Now, Buy Now’?

That is too exhausting! By doing catwalk shows, I am being creative and try to uphold the motivation and excitement. Unless you are a large organisation, it is impossible to execute a process like that in a small studio in London. Everything is big here in London, and that is the scary situation.