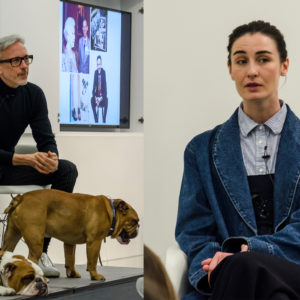 It was a big day at the College when not one but two industry superstars came to visit. First up was model Erin O’Connor whose famously elongated shape, her “determined profile”, as she calls the shape of her face, plus an extraordinarily calm demeanor have all contributed to one of the longest and most successful careers in the industry. Next up was Patrick Cox, cobbler to the stars, whose Wannabe shoes represented a footwear phenomenon like no other in the 90s and who is now back on the shoe scene with his super-chic new label, Lathbridge. O’Connor recently went back to walking the catwalk having had her first child, Albert, and Cox is determinedly back in the world of design so watch this space – neither is to be underestimated!