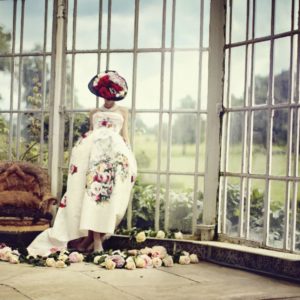 A heck of a lot of tinsel, polka dots, and pictures of old people eating fry ups in retro cafes, is what I came across on entering the House of Holland offices two weeks before Christmas. This is the sight I will be greeted with every morning for the next three months (minus the tinsel…that has now gone), where I will be interning for the web/digital team.

Working for one of my all time favourite brands is not something I thought I would ever be able to do, and it’s safe to say I’m excited! Starting the New Year as I intend to go on, I’m going to do the giving thing and provide you with a sneak peek into my first week interning at the ACTUAL House of Holland.

As you might expect, the first week starting out in a new job is going to always be a bit higgledy-piggledy. Day 1 consisted of meeting the team (of about 25 or so people), organising what felt like zillions of archive shoes and spending time in the company of THE Henry Holland, leaving me feeling like an excited school girl going to her first disco. I can assure you that I managed to ‘play it cool’ (…I think) and am now totally over the starstruck thing, although obviously I still think he’s amazing!

After my first day, I was completely buzzing to be working at HOH, but at the same time felt a little disheartened that my day hadn’ t consisted of very much web or digital. I started to worry that I really would just be organising clothes for 3 months, which didn’t really excite me all that much!

The week went on and I realised that everyday really is VERY different! As time went by I started to learn the ropes of how to process all the online orders and find the correct products in the warehouse. This was super useful as I became more familiar with the different collections and was able to see for myself how the brand has evolved over the years. I also learnt the very valuable lesson of how to wrap…you may think that this is easy, but trust me when you’re gifting a present to Rita Ora you’ve got to be on top of your wrapping game! Polka dot paper and post-it notes soon became my closest of pals, and I felt myself really getting into the swing of things and finding my place in the team.

Of course as a web/digital intern, social media is going to crop up somewhere along the way and it’s safe to say I was pretty chuffed when it did. Towards the end of the week I met with my team (2 others) and we threw some ideas around about what sort of things we thought should be posted on social media during the Christmas and New Year holiday period. I quickly learned that a brand must sell their products as well as build on their brand identity in order to be really successful on social media. For House of Holland this means, promoting December/January sales as well as the new Resort 16′ collection, and also chucking in a couple of giffs and photos of gangsta grandma’s getting merry on shots of tequila.

I was assigned the task of coming up with 40 tweets and scheduling these tweets over the holiday period so that we wouldn’t have to be posting them ourselves when we were trying to fill our tummies with mince pies on Christmas day!

This part of my first week was definitely what I enjoyed the most. I loved getting to be creative and work in a team where we could all bounce ideas off one another. What was really great (and also VERY nerve-wracking) was that Henry would sit in on our meetings, feedback on ideas and also give his contribution. When a designer gets involved in every aspect of his brand, even taking the time to work alongside his interns, that’s when you know he’s a goodun’.

Week 1 at House of Holland was definitely hard work, definitely different to what I expected and definitely a laugh! Aside from everything that i’ve already mentioned, what I also learned was that I would now be working in a doggy day care as well as a fashion brand. Henry’s dog Peggy is always around, getting utterly spoiled by everyone in the office, she even has her own personalised HOH gear…now that is one pampered pooch!

See more from Talina at: www.yourguidetostreetfashion.com