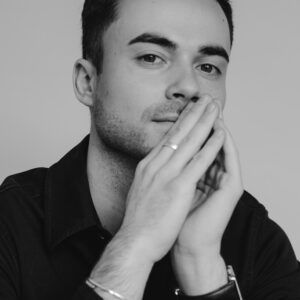 A former student of Condé Nast College of Fashion & Design has been named one of the top 30 under 30 in Media & Marketing for Europe by Forbes Magazine. Michiel Steur has reached the dizzy heights of vice-president of brand revenue at British Vogue at the incredibly young age of 27.

Michiel says,“My job is essentially to drive revenue growth across all the British Vogue platforms by developing evolving strategies for the new business generation. I work on new commercial opportunities for the teams to sell. It’s very much about business development ideation across print, digital, social media of course and also events and other special projects.”

Michiel, who’s originally from the Netherlands, says he always knew since he was at school that he wanted to work in fashion, and from a very early age worked as hard as possible to make contacts in the industry and pick up whatever experience he could.

“That’s one of the reasons why Condé Nast College was such an ideal place for me to go,” he says. “Everything on the Foundation course was geared toward the industry, how it works and how to get into it. We were given the chance to focus very early on on the elements of the fashion world we wanted to be involved in. The way the course was structured meant I could be quite strategic about what I would do with particular projects for example, to ensure that they were very much in line with my career aspirations. I knew that by the time I was looking for work that if I had tangible things to show at an interview which related directly to the job that I was going for, I’d have a better chance of securing the role. I think a lot of other courses or degrees are less practically career-focused.”

Michiel says college staff were really supportive. “There was so much advice available, not just about the industry itself but also around how to maximise my chances when job-hunting or going for interviews which was really useful. Everything was geared to get you ready for an actual career in the industry, whatever that might be.”

As a consummate networker from an early age, Michiel says the high calibre of industry professionals who came to speak at the College was incredibly useful. He says, “Even if they gave their talk to a room of eighty students with no time for one-to-ones, it made it so much easier to get in touch afterwards to say, ‘You came and spoke to us the other day and I really wanted to ask you… so and so.’ Some people were a bit reluctant to reach out in that way but I always found people were really receptive to that kind of approach and were only too happy to help.”

While he was still at the college it was one such approach that landed Michiel his big break.“I got in touch with someone in Human Resources at GQ who offered me a work placement which I went to straight from college. That led to another six month placement in the commercial department and everything went from there,” he remembers.

Now just a few years on, Michiel is the one other young hopefuls are getting in touch with for help and advice. He says everyone studying at the college should make the most of the incredible opportunities it affords to meet people who can make a difference to their careers.

“Even if it doesn’t lead to a job straight away,” he says,“It’s just such an incredible experience talking to people who are already doing the kinds of jobs you want to do yourself. The more you speak to people in the industry, the better an understanding you get of how things work. It will really help you to narrow down the sorts of things you want to pursue. There are so many different roles to consider, many of which you might not even know existed because they’re less visible from the outside, but I think reaching out to people, talking to people, is super important.”

Unsurprisingly, Michiel is thrilled and proud to have been recognised in this way by Forbes. “It has really been a reminder to myself of how far I’ve come,” he says. “When you’re working really hard you sometimes don’t take that moment to appreciate what you’ve done. It made me realise that I am doing what I always said I would do and what I always wanted to do. Since it was announced I’ve had loads of messages from all kinds of people – colleagues and team members and clients and other people in the industry; it’s been overwhelming really. Something like this also reminds you of all the help you’ve had along the way and how nothing would have been possible without it. My manager has backed and coached me; so many colleagues have been kind, collaborative and helpful and of course friends and family are always there, willing you to succeed.”

Michiel says the accolade is reinforcement for his belief that you really can achieve great things if you put your mind to it and are prepared to work hard to reach your goals, but that none of it could have been possible without a little help on the way, not least from Condé Nast College of Fashion & Design.

Interested in enrolling on the same course as Michiel Steur? Check out our Vogue Foundation Programme