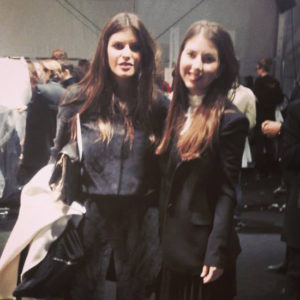 A Dream Come True at the Dior Couture Show

Tottering over the cobbles of Rue de Varenne in five-inch heels, heading towards the Musée Rodin, turned out to be the least of my worries en route to the Christian Dior Haute Couture SS14 show. Having thanked my lucky stars that I’d made it to the showroom without toppling to my death in front of the many street photographers lurking around outside the museum under matching black umbrellas, the harsh realisation that the show’s seating appeared to be modelled on the polar ice caps came crashing down upon me.

The room was startlingly bright, and many showgoers stood out starkly in all-black Parisian get-ups, synonymous with the fashion capital’s elite. There was however a slightly more colourful audience at this presentation than usual. Dior had provided sixty students from fashion schools around the world with the opportunity of a lifetime; a trip to Paris where they would stay in the very beautiful Hôtel du Louvre, be given a tour around the Dior atelier, attend lectures given by both LVMH and Dior at the company’s headquarters, and, most importantly, providing all of them with tickets to the show. I was ecstatic to be one of two students representing the Condé Nast College.

Without warning (the lighting in the room remained bright white throughout the presentation) music blurted out from all corners of the room, only for Kasia Jujeczka to come storming out in the first look; a perforated sheer dress exposing a slender shoulder, worn with silver heels that featured straps creeping up to the knee, reminiscent almost of Alexander Wang’s SS13 footwear. Cutout detailing and sheer fabrics were constant themes throughout the show, which was a much more modern, and as Raf Simons’ referred to it “abstract,” interpretation of couture. The relative practicality of the clothes was striking; skater-style skirts graced the runway and the dead straight hair plastered to the models’ foreheads was not the only reference to the nineties. Anyone familiar with the era’s techno scene would have felt a pang of nostalgia on hearing the choice of music, Joey Beltram’s ‘Energy Flash’. A modern take on couture indeed.

Lines were clean, silhouettes youthful, and playfulness very much present in many looks, what with the voluminous backs and fresh, pale hues. Some pieces made me question who exactly today’s couture customer might be. A sequin mini dress with a short train adorned the runway, paired with, wait for it, a genuine pair of couture trainers. But just as I was about to resign myself to the fact that even I was too old to wear some of this stuff, Simons sent a positively first lady-esque floral coat down the runway, followed swiftly by a sleeveless version. Stand out pieces included one crochet laser-cut shift dress featuring parted peplum at the bust and a pair of mint green shoe-boots, which were enough to make any woman weep with envy. A navy blue mullet dress also caught my attention, partly because it’s model was the one and only Stella Tennant who flew the flag for Britain, but also because we had been given the opportunity the previous day to have a look around the Dior atelier, where I had seen the final touches being made to this very piece. Eight modéliste’s had surrounded this dress, which only emphasized the fact that couture is so much more than simply a process of sending looks down a runway. The time and effort that goes into creating Simons’ artistic vision is truly breathtaking.

Simons is an innovator. While references to Monsieur Dior’s original work for the house had been pursued, and Simons’ ever-present adoration of women was clear for all to see, perhaps Simons’ main accomplishment with this show was that he managed to translate an area of fashion that often baffles even the most style-savvy of today into something modern and, dare I say it, wearable. Simons explained backstage, “I wanted to focus on the idea of intimacy around couture more than anything else, the emotional experience of it; the relationship between the clients, the salon, the woman.” Having gone behind the scenes the day before, I can attest to the fact that while the looks were perhaps more modern, clean and armed with a younger, fresher vibe than your average couture show, the craftsmanship had been as intricately carried out as one would expect from the house of Dior.

Ultimately I imagine I would not have cared had an army of models sported bin bags down the runway. Not many people can say that their first Paris fashion show was Dior Haute Couture, and just to make sure that anybody reading this who does not already hate me absolutely will in due course, I also met, shook hands with (and basically best-friended) Simons himself backstage, who was a true gentleman and seemed thoroughly interested in my Dior experience, one I will not be forgetting any time soon.