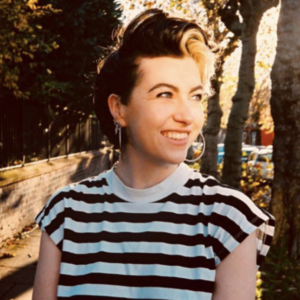 Rosie Boydell shares her top tips for the industry’s newcomers and the honest rendition of her fashion-filled journey. From being an eight-year-old Vivienne Westwood visionary to couture & bridal consultant: we learn the benefits of grasping every opportunity and that kindness is, of course, key.

Learning a Love for Fashion

From a rural town in Devon, Rosie grew up without a local fashion figure or inspiration. She described how no one even liked fashion, so it was her thing.

It all started when her mother took her on a four-and-a-half hour journey to the fashion capital, London, where they attended the live Vivienne Westwood exhibition Fashion In Motion at the V&A museum.

“I had a lightbulb moment, instantly falling in love with the pieces that I saw. Those amazing platform heels, corsets and all those fabrics and draping…that was it. I was sold.”

Fast forward to leaving school in 2012, Rosie just wanted to be around clothes. Although considering university, she decided to delve into the working world of fashion and at what better place to do this than the high street brand of its time, Topshop.

“Topshop was the place which attracted all these young, like-minded groups of fashion obsessed people, all under one roof,” Rosie tells us.  This obsession explained the abundance of sheer creativity yet frustration which was felt, as each and every one of them were hungry for a piece of the industry.

Although her retail work wasn’t always the finest experience, it revealed her resilience and served her the priceless practice of talking to anyone, which cannot be taught at university but has served her remarkably well throughout her career.

In 2015, Rosie enrolled on the 10-week Vogue Fashion Certificate at Condé Nast College in London. “The CV which I use now is actually a modified, updated version of the one created in one of the college workshops” she explained. She goes on to add that the email etiquette taught during the course is another tool she has used throughout her career.

As a result of none of her peers in her hometown of Devon sharing a common interest in fashion, Rosie felt out of depth when studying at the college. However, Rosie soon discovered that money cannot buy taste, work ethic or manners – key practices she uses in her everyday work life. 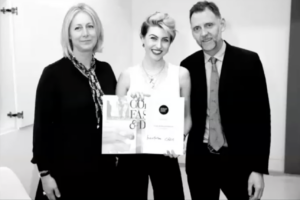 From Apprentice to Style Editor

Graduating from Condé Nast College and after a very competitive application process, Rosie won an apprenticeship at The Telegraph, assisting the editor of their fashion supplement Stella Magazine.

Being immersed within the core of a national newspaper was fascinating, and whilst others were reporting on major world events, Rosie found herself comparing different shoes Kate Middleton was wearing, and what her skirt length might symbolise. An overnight change at the company made Rosie the assistant to five editors within the building, where she soon realised she had to ‘toughen up’, as this was of course, now the real world.

It was at this apprenticeship Rosie first saw her name in print within a magazine, making her beyond excited. The working days were left with no time to spare so found herself in the office until 10pm working on the fashion product pages, which soon progressed on to taking up the entire weekend – as this is what she really wanted to do. Her persistence and perseverance soon paid off: as within three years she had risen to Acting Style Editor.

After leaving her position as style editor at a creative agency further in her career, Rosie was left feeling like she had lost everything: her job, friends, partner and flat; however she used this opportunity to start over and subsequently found herself working for The Wedding Club. She became deeply involved with the bridal scene and even tried the gowns on.

“I just fell in love. It gave me all the highs of seeing the transformative power of clothes but on an extreme level – the pressure of finding a wedding dress is unparalleled, so the ability to make these brides feel at ease became my favourite thing to do.”

It was at this moment Rosie realised what actually made her happy whilst working, rather than what she thought would make her happy, adding to another one of her valuable lessons. We are reminded to ‘trust the process’.

“Every appointment and meeting is an opportunity to sell yourself.”

Being a bride-to-be would make every Vivienne Westwood fan’s dream come true by having the opportunity to embody one of the ivory, corseted gowns on their wedding day. In May 2021, Rosie had her own wedding dress consultation on Davies Street, home to Vivienne Westwood’s couture store.

She had recently been furloughed due to the global pandemic and was working for herself, but when a position arose on the bridal & couture team, Rosie received a message from the consultant who led her appointment, asking her to apply for the job – which she was offered and began in November last year.

Now fully immersed and representing the iconic British designers brand herself, Rosie shared some of her favourite looks from the Vivienne Westwood archive.

‘The Pirate Bride’ from the s/s ’98 catwalk collection, ‘Tied to the Mast’, is one that Rosie is completely obsessed with. A long, Swarovski encrusted gown, with the iconic Westwood corset – what’s not to love? 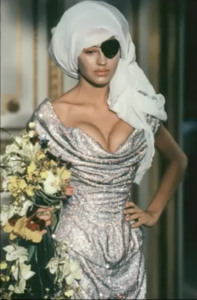 Next up: Dua Lipa for the 2021 Brit awards, in the classic couture Westwood silhouette with a saffron yellow finish and a purple fishnet overlay. “They absolutely killed this look” she admitted, then revealed that it was actually an adapted version of the dress that Hailey Bieber wore for her rehearsal dinner. “It was this mini corseted silky dress – they switched up the fabric, added a train and the diamante overlay – it’s just insane.” 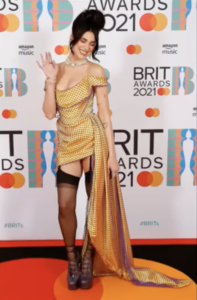 Being able to hear such an authentic and honest account of Rosie’s journey was refreshing and inspiring. From experiencing a tormented childhood at school to becoming a Condé Nast College graduate – we have learned some valuable advice which all should embark on in their career. Having an encyclopedic knowledge of brands and their products is a fundamental asset to acquire as a stylist and to always be honest and kind.