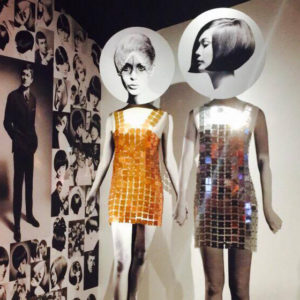 The Beatles, highlights from the infamous Woodstock festival, and even a 1960s Barclaycard – these were just some of the spectacular highlights from the V&A ’s fascinating exhibition, ’You Say you Want A Revolution?’ showcasing all branches of fashion, film, design and political activism movements in the 60’s.

The exhibition space was vast, consisting of a zigzag layout making you feel as if you were exploring your way through a maze, uncovering gems of the hedonistic 1960’s. Enchanting Beatles music echoing through my headphones while cleverly changing tracks as I moved through different parts of the exhibition, as well as glistening metal disc dresses, all luring you from one corner to another. Unable to take my eyes off anything, I soon discovered those iconic round glasses, worn by the legend himself John Lennon. Each area held importance for a particular highlight of the 60s. Beautiful, bold and exciting was the endless shelf of 250 psychedelic album covers that adorned the exhibition wall. The bursting neon colours juxtaposed with giant posters glimmering provocatively with the letters LSD, were certainly eye catching. The array of colour was hypnotic, and like opening a jewellery box, I found myself delving deeper and deeper into the treasures the 60s had to offer. A particular excitement towards the end of the exhibition, was the first ever computer mouse and calculator. To my astonishment the computer mouse was an enormous, almost humorous square wooden box with a single protruding red button, for clicking. Enclosed in a glass box, looking in on these items made them almost sacred, and simply fascinating. Further into the depths of the exhibition was a large room, with a carpet of artificial grass and scattered beanbags, solely dedicated to recreating the rebellious and libertarian hippy attitudes of the ’69 Woodstock festival. An enormous screen displaying footage of Jimi Hendrix performing set the scene, and the atmosphere was certainly electric. Curator, Victoria Broakes certainly outdid herself in achieving a fresh take on the iconic 60s, while showing us how much of an impact it had on us today. As I walked out onto the Cromwell road and back into 2016, I felt as if I had woken up from a retro dream.

To visit the exhibition, head to the Victoria and Albert Museum, London SW7. Tickets online are available until 26th February 2017.