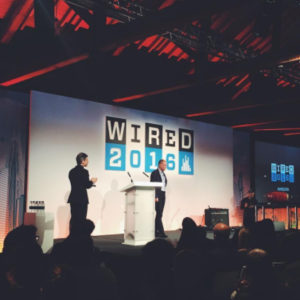 November 4th saw over 300 people, from all over the world, descend upon Tobacco dock to watch and learn from the 50+ speakers hosted by WIRED at their annual conference. Of those who spoke, I found the principles and goals behind the talks of Bertrand Piccard, Jurgen Schmidhuber, Gingger Shankar, Jessica Matthews, Gideon Mendel, Leslie John and Sam Gregory particularly inspiring.

At the heart of almost all of their concepts exists technology, and the means through which it can be utilized to reconcile economy and ecology. The exceptions being Gingger Shankar, who spoke about the struggles of three generations of women in her family against patriarchalism before performing two beautiful musical pieces, and Gideon Mendel who made an idiosyncratic attempt (through photography) to address climate change. Both spoke about these salient issues in very visceral ways.

Essentially the message was repeated time and time again was that, what is so often construed as impossible, is only so in our imaginations. Jessica Matthews, CEO and founder of ‘Unchartered Play’, for instance spoke about the inclusive and exciting future that exists when you look in remote places for innovation. Inspired by the resulting carbon emissions of generators in African villages, Jessica saw potential to democratize energy access, whilst simultaneously promoting a shift from sedentary to active; thus solving an enormous, global, infrastructural issue.

Additionally, Leslie John tackled the privacy paradox in her talk about the human predisposition to like people who disclose information to us, over individuals who choose not to disclose information for purely arbitrary reasons – the later incurring an undeserved social penalty. Essentially she illustrated how the advent of social media has triggered the blurring, and in some places diminishment, of the public/private barrier.

WIRED2016 was both thrilling and inspiring in equal measure, I am so excited to start using the the enormous array of information I collected to inform my own opinion and work.