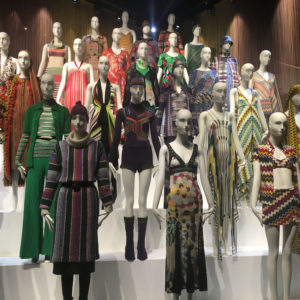 This week began with a lifetime high. We entered a building greater than the Colosseum, better than the Empire State Building and with more creativity than the Eiffel Tower. The doors to the Mecca of the fashion world were opened to us…at Vogue House.

Once everyone took their millionth photo out the front of the building (another million to be taken once inside), we were welcomed into a warm reception of champagne and nibbles. How Vogue it truly was.

Surprisingly, the days following the trip to the Holy Grail wasn’t anticlimactic at all. Tuesday involved another excursion where we went to the Fashion and Textiles Museum for the Missoni exhibition. We lovingly gazed upon rooms surrounded by the brand’s signature knit. It was entertaining for onlookers to see how a group of people could be so excited by a 5x5cm swatch of fabric. The exhibition was reflected on in the classroom as we began lectures on the importance of branding and how one should implement it into their own business. This theme ran throughout the week as we learnt about the other very important aspects of the industry that are often over looked.

Chris Hughes taught us the publishing side of running a fashion magazine. Then, in smaller groups spoke to us about the future of media and where we are heading. Vogue’s legendary Publishing Director, Stephen Quinn, further elaborated on this discussion. This was one of those moments that is difficult to describe. I have never actually been part of a lecture where one person was able to draw their audience in hanging off every word they said. Whilst he clearly has exceptional public speaking skills, it was actually more to do with the way he spoke about his experience in attaining advertisers to appear in Vogue. He spoke just like he does when he is dealing in this business and thus really brought the audience into his experience. It was one of those moments that once it finished all that was left was an audience in complete awe of such a gentleman.

The week finished by turning this knowledge into practice. Journalist Paul Tierney and Julia Robson both gave us lessons in the head and sell of a magazine. The importance of good headlines to grab the viewer’s attention was discussed and then Julia went into depth about how to make the body of a fashion article just as solid. We then got to put this to practice in our computer sessions where we created our own Vogue mock covers using these techniques and tools of the trade.

We cannot believe how quickly we have arrived at our last week of the summer program. We are sure we are in for another remarkable week and some emotional goodbyes.