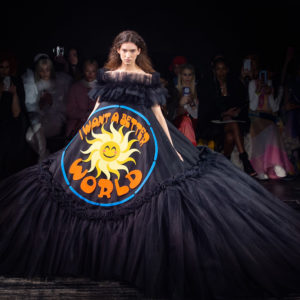 T-shirts, slogans and a whole lot of attitude. How a picture can really speak a thousand words.

Viktor and Rolf’s Spring 2019 Haute Couture collection has become a viral sensation. 17 oversized, exaggerated silhouette couture gowns with layers of tulle and pleated silk chiffon have been plastered with sans serif font slogans as they make their debut in Paris.

Some of the most notable pieces from the ‘Fashion Statement’ collection include ‘I am not shy I just don’t like you’, ‘I am my own muse’ and ‘Go to hell’. Is this a wider depiction of the social media memes trend which seem to capture the mood of great swathes of people in one short anecdotal phrase? Or is this the re-emergence of the noughties slogan t-shirt getting a millennial reboot? “To what extent can you say something with clothing, literally,” – said the pair backstage to Vogue reporter, Amy Verner.

Take a picture and you immortalise a specific moment in time forever, we wear a t-shirt and can do the same. Take the thirst for the 2018 trend of a vintage tee, decorated with the album covers of musical legends, which became the new muse for millennials. A touch of nostalgia and comfort for the known, merged with the denims and miss-matched layers now sees a re-launch with a change of design towards a ‘call to arms’ slogan. In a time where the floss can go viral or a single egg can become the most liked image on Instagram (overtaking Kylie Jenner), applying slogans to a garment has never been so popular or a device for promoting communication. In a fast paced, buzz-feed, sound bite news lead society, the consumer can become their own advertisement and represent their own views by their choice of clothing.

This is nothing new – the slogan tee first grew in prominence with Katharine Hamnett, arguably the pioneer of the slogan tee, who most memorably dressed Naomi Campbell walking in 2003 with a shirt saying, ‘use a condom’ after a t-shirt that stated, ‘choose life’. Vivienne Westwood adopted the same technique with ‘I AM NOT A TERRORIST, please don’t arrest me’ scrawled across the front of a t-shirt in crayon in 2005, in collaboration with civil rights charity Liberty. Henry Holland started the foundation of his brand in placing controversial slogans on t-shirts in 2007 namely ‘I’ll tell you who’s boss Kate Moss’. A trend re-picked up in A/W February ready-to-wear 2017 collection of Dior. It was not until 2019 on the Viktor and Rolf runway however, that the slogan made its Haute Couture debut. This is representative of the bubble up trend and how something had emerged on the street and moved up to the high-end luxury market.

Where does the slogan go next? Collaborations are key and the t-shirt can be used as a force for good representing a cause or charity. As the appetite for images and a need for consent stream of content grows, our clothes can have the ability to be more than just our garment but also spread a message, start a conversation and encourage thought.

Find out more about our BA Fashion Communication course