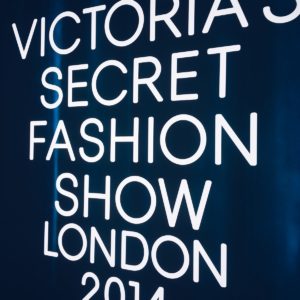 The Victoria’s Secret Fashion Show was all about transport. And no, not in the tube-at-rush-hour-please-get-me-out-of-here-why-are-these-people-so-close-to-me kind of way. Think, instead, Aladdin’s magic carpet. Cheesy, I know, but this show, like Disney’s most famous rug, took its audience on a journey through ethereal worlds of enchantment and wonder. From a starry cosmos of golden wings and glitter to a cheeky sleepover full of tulle and frills that spilled into a galactic space-meets-sport dance party, which then spun around and dove into a dreamy woodland fairy tale, and closed with a black moon masquerade ball. A mouthful to say and a whirlwind to experience, the 2014 Victoria’s Secret Fashion Show certainly took spectators on a ride of a lifetime.

The show opened in a dazzle of bright lights and high-energy beats– building up the room’s palpable enthusiasm into explosive proportions. When the first Angel appeared, everyone erupted in a thunder of hoots and hollers and snapping smartphones. With camera phone flashes going off left and right, the models lived for the applause (applause, applause) and did not hold back on the glamour. Decked out in shimmery drapes and gigantic golden wings, they strutted down the catwalk in all their perfectly toned, symmetrical-faced glory. 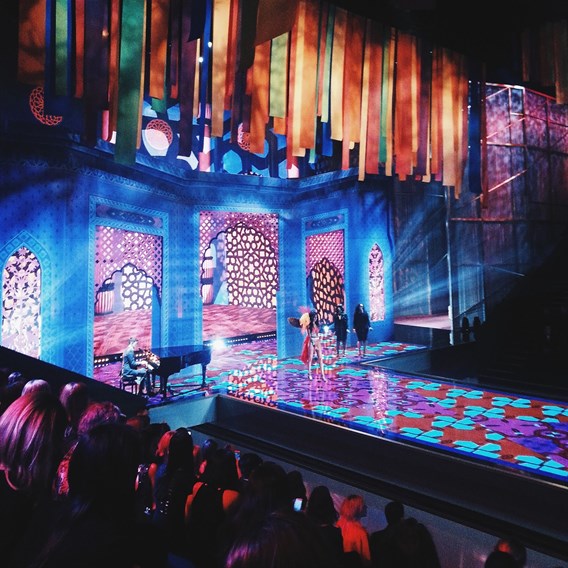 And just as the audience started swimming comfortably in the lively atmosphere, the show astonished and brought everyone into calmer waters. The lights dimmed and UK darling, Ed Sheeran, walked out into the spotlight. As the crowd grew silent in anticipation, the multi-genre musician began singing his heart-melting, “Thinking Out Loud”, as Angels floated past him in glittering jewels and cascading capes. It was impossible not to get immersed in the moody, celestial atmosphere with Ed Sheeran softly crooning, “Cause honey, your soul could never grow old, it’s evergreen. And, baby, your smile’s forever in my mind and memory”, whilst models twirled past him like traveling stars along a charcoal sky.

Once Ed hummed his last note, the show woke the audience up out of its starry-eyed reverie and into one of Taylor Swift’s exclusive slumber parties– giving everyone a taste of what it’s like to be T Swift’s best friend. Dressed in a floor-length nightgown, Taylor stomped around the catwalk and launched into her catchy new song, “Blank Space”, as Angels jumped on plush couches and bounced along the stage in frilly robes and tulle sleepwear. 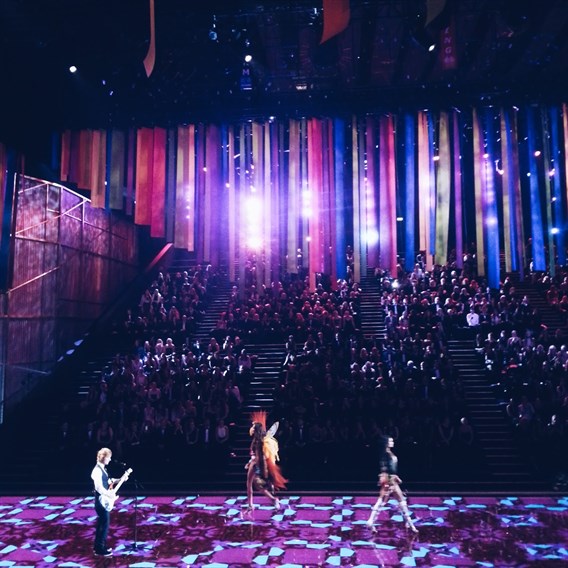 Piggybacking on the excitement of a girls night in, Ariana Grande followed in full fanfare– taking over the stage with a crew of ultramodern dancers and turning the slumber party into a dance party. The young popstar is shockingly tiny in real life, but has an equally surprising BIG voice. And she certainly showed it off by belting out impressive versions of “Bang Bang” and “Break Free” as Angels bopped around her in hot pink track jackets and thigh-high boots.

With all the adrenaline in the air from back-to-back dynamic performances, the VS show ricocheted back to a quieter ambience, replacing neon lights with white paper trees and plopping everyone into an enchanted forest of mystical faeries and Hozier’s “Take Me To Church”. As reverential symphonies collided with Hozier’s soulful drawl, VS models fluttered around the violet haze in tinsel foliage and trailing ruffle skirts.

And just when I thought show was going to end with a Marc Jacobs SS15 whisper, out marched a horde of masked Angels in all-black garb followed by none other than the show’s headliner, T Swizzle, to end it all in a bang. With a slew of dark Angels in her wake, Taylor commanded the runway with the very appropriate, “Style”– reflecting the “James Dean daydream look” in everyone’s eyes. 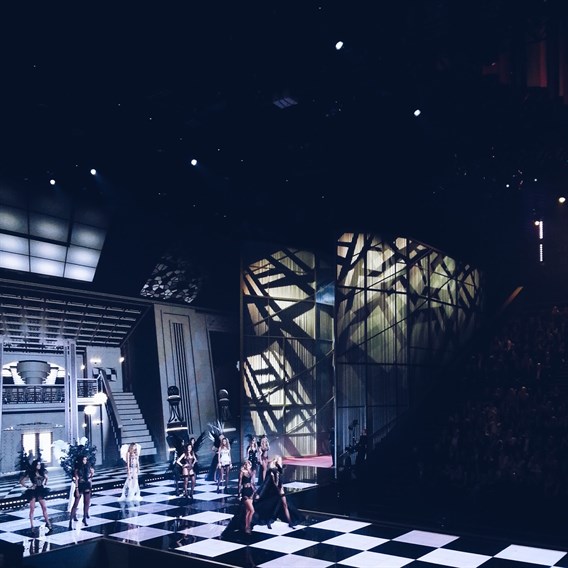 Then some intriguing mix of contemporary and interpretive dance shadowed Taylor’s act, silencing the crowd for the Angels’ final appearance.

And what an exit it was! Black and white balloons fell from the ceiling, “Victoria’s Secret” flashed in large letters on the widescreen, and all the models flooded the stage, jumping and waving, whilst LED confetti lit up the room.

As abnormally large black balloons continued to hit everyone on the head and people scrambled to get the best photo of all the models on the catwalk, it was obvious that this event was a night that no one would ever forget (because photos uploaded onto social media are permanent).

And, if some people managed to make it through the night without snapping a single photo for Instagram, then everyone definitely left believing in the magic of Angels, even if they didn’t get picture-proof. 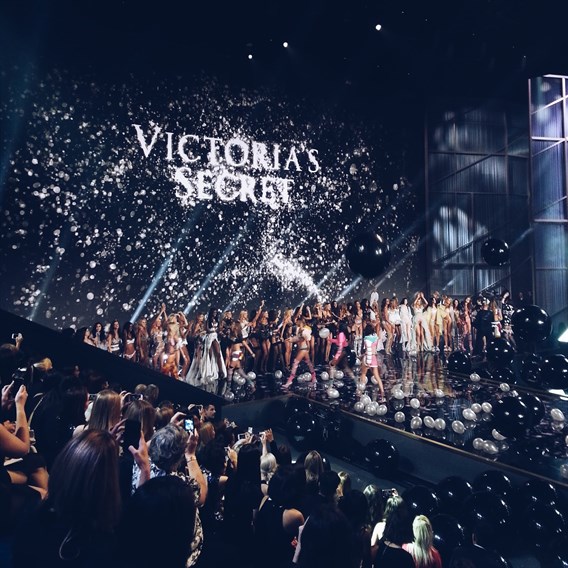