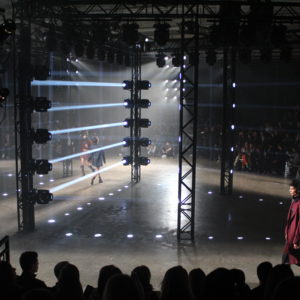 Last Saturday night was not your – or certainly, my – average evening. That was because I was sat in a row two seats behind Ellie Goulding and Will.i.am, champagne in hand, watching the Versus Versace show as part of London Fashion Week A/W17. Backtrack to an hour before when the fashion pack started rolling into Olympia West in full glam attire, mainly Versace. Obviously as we made our way up to the spectacle of a show space, we were greeted by hoards of photographers and male models carrying endless trays of champagne. The room filled up with a glossy array of FROW names, Tanya Burr and Daisy Lowe amongst the many, and the networking was under way. It was a great opportunity to work the room and build up connections, though, when asked by an individual what I did in fashion, it is safe to say stating I was a Condé Nast College student didn’t quite compete with his admission that he was creative director of the show. Half an hour later, we were sitting in our third row seats as the show space lit up with blinding white spotlights and Gigi Hadid sashayed down the runway. Models wore strong silhouettes, contrasting volumes and thigh-skimming sheer dresses with mesh and jersey fabrics. Makeup was dramatic with exaggerated deep blue eyeshadow and accessories were emblazoned with the Versus logo. Ten minutes flew by and before we knew it, Donatella had taken her bow and the show space had emptied out at fashionably fast speed. It was our first official inside track into the glamour and exclusivity of fashion week and it simply left us all wanting more. Needless to say, we all found ourselves feeling pretty at home in a dream world we won’t be waking up from anytime soon.