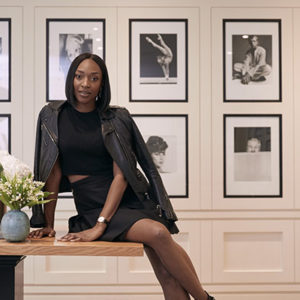 The Condé Nast College was delighted to welcome the incredible Vanessa Kingori, MBE,Publishing Director at British Vogue to our virtual lecture theatre for an industry talk.

Vanessa Kingori MBE is a multi award-winning, businesswoman, youth advocate, diversity proponent and mother.  Vanessa has over 15 years experience in the media industry and she has a special focus on business transformation, digitalisation and change management.

In her role as Publishing Director at British Vogue she is responsible for all elements of the brand’s revenue and brand strength. This includes advertising, branded content, partnerships, circulation revenues, events, marketing and editorial alignment.

Vanessa’s appointment to Publishing Director at British Vogue in 2017 made history. She is Vogue’s first female business lead in its 104 year history. She is also Condé Nast’s first and only Black Publisher.  Vanessa’s role at British Vogue has involved a significant shift in the brand’s purpose and business strategy with an emphasis on diversity of perspective, social responsibility and female empowerment. This has led to multiple business awards and revenue growth. Prior to British Vogue, Vanessa was Publisher at British GQ, signalling many firsts for the company.

Before her decade at Condé Nast, Kingori worked at Hearst Magazines and the Evening Standard.

Her work as diversity proponent includes the judging panel of the Black British Business Awards since 2015. Kingori has also judged the Veuve Clicquot Business Women of The Year Award for the last three years and The Mayor of London’s TFL’s advertising competition aimed at challenging a lack of diversity in advertising for the past two years. Kingori is also an ambassador for Mothers2Mothers and has been credited amongst the 100 Most Influential Black Britons every year for the past seven years.

Her body of work and services to British Media led her to be awarded an MBE on the Queen’s 90th Birthday Honours Lists in 2016.

“The more love and energy you put into the work that you’re doing, at any level, the more likely it is to pay off and be rewarding.”

During her inspiring talk, Kingori laid emphasis on the importance of hard work as well as nurturing talent.

She explained that there is no clear career path to becomings a Publishing Director at one of the world’s leading magazines, but insisted that creative solutions to revenue are paramount.

Kingori stated that “Digital has been nothing but positive for our brand. As our number one marketing tool, our social media platforms… there is no better PR for us than when we release our covers on our platforms, the energy, and buzz, and the spike in sales and subscriptions we see is priceless.” She also spoke about Edward Enninful using social media to speak directly to the Vogue audience and how he has been successful in creating a community, noting that “Communities are extremely valuable” when it comes to marketing.

She lamented the fact that trust is an issue when it comes to media, and that having real conversations and allowing people to be themselves “rather than create avatars of themselves” is important when it comes to ethical media practices.

With so many achievements under her belt and so much positive work continuing through the Vogue brand and beyond, we can’t wait to see what this businesswoman and mother does next.

Exploring the true meaning of Diversity with Laura Johnson