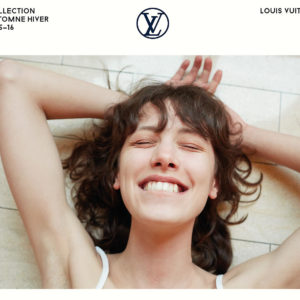 Nicolas Ghesquière’s first collection for Louis Vuitton challenges you to an open ended journey into the world of adventure and great aspirations… but who is the Louis Vuitton girl to the new LV Creative Director?

As a Condé Nast College student my excitement for Nicolas Ghesquière’s first collection for Louis Vuitton had been brewing ever since November when UK and Ireland Managing Director Tom Meggle gave us an insight into the world of Louis Vuitton when he came to talk to us. He emphasised the importance of keeping the brand exciting and reviving for a new younger, future generation. “Nicholas is a Fresh Face! A new vision! A New Generation!” Meggle said. Nicolas’ designs hold continuity; they encompass modernity, simplicity and discretion. We were told that Nicolas sets out to inspire women with his designs… and boy was I inspired!

“With Nicolas joining,” Meggle continued, “the fashion house now has the opportunity to rejuvenate the brand.” So today, 5 months later, the big question is: “Who is the Louis Vuitton girl to Nicolas Ghesquiere?”

The “Ladies at the Bath” press release, presented a refreshing perspective; the new Vuitton girl is real, simple and very appealing to the modern-day explorer. The look book begins with girls photographed at random intimate moments and introduced by name. After which the collection themselves are showcased, fitted to each individual and the models then come alive, full of personality – a true tribute to women and their individuality.

This collection is a travelling diary of the aspirational soul of my generation, those who have not yet worked out where to put down their roots. So, the must haves for your next open-ended journey into the world are:

It’s me it’s you, it’s the traveller in us, slightly daring, slightly raw, mouldable and fresh. Get packing – the world of Louis Vuitton awaits.