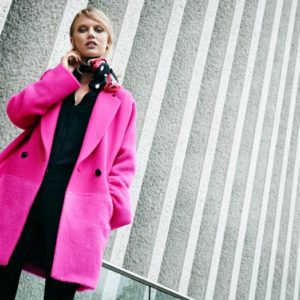 What will be the main fashion item this winter? The answer is Coats, in every shape and colour.

In the last few years coats have gone from basic to statement making, the reason of it could been hidden in the take over of the urban wear into the high-end fashion.Shortly, designers now, are more free to experiment, even if it’s about mixing menswear to womenswear. But let’s see how coats became influential.

Who, when young, never stole a coat from mom’s closet to feel beautiful and adult?

The real trend of Autumn winter 2017-17 is this: coats in every shape and colour.

The coat has a long and variegated heritage; from “capes” to “rendigote”, “perefrine” to “fischù”, the silhouette are different and adaptable to the everyday lifestyle.

In 1800 the crinoline trend didn’t let the usage of the classic paltò with double lapel; they give space to capes and cloaks. The early ‘900 instead are the years of the “advance-guard fashion”, the “walking fashion” and the firsts car races in which coats were warm and comfortable. The nights coats instead, the ones for the exclusive clubs, use to have the train and jewellery buttons.

In 1930 the american fashion became popular and thank so the first magazines a big innovation arrives also in europe: the pert-a-porter. This invention made possible the industrial production of good quality products.

In the meantime in France, the big names of fashion created for their exclusive clients, evening coats with high quality fabrics, big silhouettes and raglan sleeves. Balenciaga is one of the precursors. Christian Dior, in the middle of “The New Look”, created the firsts grooved coats, while Paul Poiret’s coats that were born to capture people’s attention enriching them with asian details were no more than a memory. From these notions Achille Maramotti had a great intuition: make the french fashion attractive to the middle class. The doctor’s wife was the target. In fact, in no time, Maramotti created Max Mara, a big worldwide known brand for its coats.

In the ‘60s it is thanks to the movie “Doctor Zivago” and Jackie Kennedy that coats became famous again, not just as a must have, but also as a byword for elegance.

In the 2000s fashion reinvented coat’s style; from the asymmetric one to the colourful one, mono ordouble-breasted, with or without neckline, mohair, boiled wool, in tweed, plaid or fur-lined. It is the piece that it’s with us during the long cold winters, now we can understand why Gogol invented a story on it.

Today coats are in everyone’s wardrobe, but the autumn-winter 17/18 shows gave them an extra kick.

Over is the common denominator of every collections that could be extra-long, extra-large, in fedora, structure wool or soft. Well, designer had fun with coat’s silhouettes and shades this season.

First of all the military coats, in felt, tight at the waist with a belt as tradition of the early ‘900 wants or also wide and unbuttoned. The important thing for who proposed it like Burberry, Marni and Prada it’s that must be olive green. But monochromatic could be boring, so there is who, like Bottega Veneta, Dior and Drome that are proposing animalier fantasies to remind the ‘50s with the pattern that used to embellish jackets, hats and accessories of that time. There is who, instead, decided to aim on something really bright, fighting cold with orange from the head to the feet. It is the case of Boss, Max mara and Emilio Pucci. But orange is not all; winter paints hisself pink for Kenzo, Valentino, Alexander McQueen, Courreger and Rochas.

Designers such as Calvin Klein, N21, Maison Marcela and Suno however, took inspiration from the Victorian era and turned models into modern Sherlock Holmes.

The leather of the celebrated ’70 can not be forget for Derek Lam, Loewe and The Row, that decided to present currents Jane Fonda in “Klute”. Shiny and dark like the Matrix trench the coats Lanvin, Isabel Marant, Christopher Kane and Miu Miu, but to give a softer feeling at the eyes there are Maiyet, Nina Ricci, A.P.C. and Max Mara creating wool coats or in soft shearling.