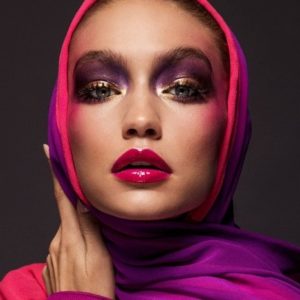 The digital age that we live in echoes how fashion is shifting and reacting to the fact that we live our lives on-screen, and how fashion magazines are adapting to fast paced, full mobile lives. Student at the Condé Nast College of Fashion & Design got an insight into the digital age of fashion media, when Philippa Morgan, the Online Editor of Vogue Arabia, were here to talk about the exciting journey of launching the 22nd global Vogue title online.

With a background at Harper’s Bazaar, six years at Condé Nast International and the launch of Who What Wear in the UK, Morgan was the ideal online expert to launch Vogue Arabia’s online platform, Vogue.me, in October 2016. This is the first time that Vogue has launched first digitally – a milestone in the history of Condé Nast and one of the most hyped Vogue titles for one of the most powerful of new markets in fashion.

“This Vogue is very overdue”, the former Editor-in-Chief, Princess Deena Aljuhani Abdolaziz told The New York Times in April 2017, “The Arabs deserve their Vogue, and they’ve deserved it for a long, long time.” She goes on to explain how Middle Eastern women have been serious couture clients since the late 1960s.

The first print issue debuted in March 2017, with the supermodel, Gigi Hadid, on the cover. The issue was promoted through teaser videos, and also featured a blog post on the Saudi sister bloggers, The Abduls, and their recent online venture, Coded Nation.

The latest June issue is about celebrating identity and features Halima Aden on the cover. The up and coming model is the first to wear a hijab on the cover of Vogue. Morgan mentioned, how the Editor-in-Chief, Manuel Arnaut comments that “Halima wears her hijab as a crown”

The print edition and Instagram page of Vogue Arabia are bi-lingual, English and Arabic, which allows the magazine to differentiate what is published depending on the language. Morgan said that this has been both a challenge and opportunity, as it is vital to maintain the same tone of voice.

Find out more about Vogue Arabia on Vogue.me.