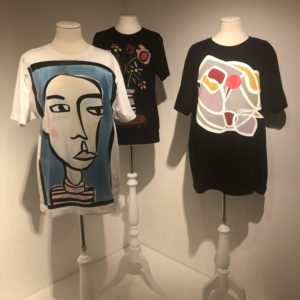 It’s recently that we learnt about the humble, omnipresent t-shirt and its impact on the world, at a recent visit to the Fashion & Textiles Museum – T-SHIRT CULT CULTURE SUBVERSION. An interesting exhibition in that it doesn’t focus on the history, but offers up a timeline of selected milestones, to remind us that the t-shirt has been ‘an object in the service of community, commerce and personal identity’, as well as a silent language in its own right.

A lot can be said about the simplicity of the t-shirt. A collective representation of our day-to-day lives, the t-shirt is more than the cotton we wear on our backs. It’s a form of identity: the university we attend, the sports we follow, the music we listen to, our political views, the trends we follow, even a platform to announce our sexuality.

The t-shirt has come a long way since it’s conception as an undergarment in the 19th century – it’s purpose demonstrated in 1913 when the US Navy issued them as underclothes garments. It didn’t slip into the mainstream until 1939 when the first printed/promotional t-shirt was produced for the film ‘The Wizard of Oz’. By the 1950s the promotional t-shirt practice was in full swing, advertising an array of products. 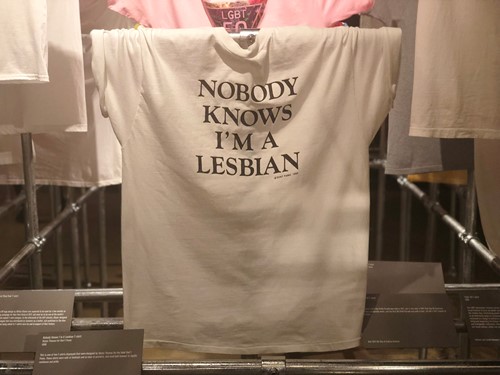 T-shirts have played an important role in political and activist dialogue, allowing a silent means of support to a cause or to highlight a political view, as well as fostering a shared sense of affiliation. While offering up a silent statement, they often incite intense responses and can be viewed as controversial.

One form of the t-shirt that I think we can all relate to is the music t-shirt. Both a promotional item and a personal souvenir, the music t-shirt is a powerful connection between people and music and has long been held as a platform for political and social beliefs. Similar to this is the fashion t-shirt which came into prominence in the 70s when high-end designers started incorporating branded t-shirts into their collections. Fashion houses cleverly used the t-shirt for expressing social and political views, which in turn increased brand loyalty by aligning customers with their voice.

Not surprisingly the t-shirt also featured heavily throughout the Pop Culture period: Andy Warhol’s Banana artwork for Lou Reed and The Velvet Underground is an example of silk screening technique and a juxtaposition between fine arts and culture. Marilyn Monroe was the subject of Warhol’s fascination, reproducing multiple versions of a 1953 publicity image of the star on t-shirts, which today is symbolic of Pop Culture.

T-shirts are symbolic of time, and can provide a fascinating look back at our personal and world history, as well as providing a silent platform for individuality, expression and views. The simple t-shirt isn’t really that simple at all.