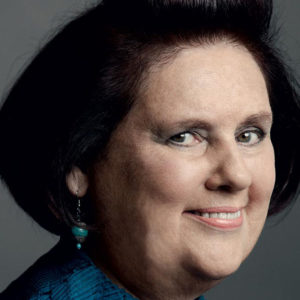 She left Condé Nast to focus on her Creative Conversations podcast now in its third series – an exclusive and entertaining window into her world, celebrating fashion talent from Olivier Rousteing to Christian Louboutin, Michael Kors to Paul Smith.

The busy life of Suzy Menkes

Perched in an artistically decorated room, complete with lofty ceilings and an unparalleled volume of print filled frames, we got our first glimpse of the iconic fashion critic, Suzy Menkes. Funny, charismatic, and utterly authentic, our conversation with the journalist and fashion editor opened up with a brief history of her most recently past fortnight. Taking us on a retrospective journey into her two-week diary, filled with engagements that a Zoom room occupied by fashion students could only fantasise about, and a unique insight into how the career of one of fashion’s most memorable commentators has evolved amidst a long-standing, global lockdown.

Whilst offering a glimpse into her timetable, and other influential individuals, Suzy noted the significant efforts that are required to produce the artistry of fashion. She noted, “A lot of people don’t realise, maybe I don’t always realise, what a lot there is behind the scenes. That’s why I’m talking about all these different people because they’re all a part of the weave of fashion.” Her consideration for not only the enduring efforts of the industries creatives, but their individual influences over each aspect with which she engages offers clarity into the success of this fiercely independent fashion journalist.

Suzy’s independence, and carefully considered autonomy of opinion, are traits that have brought her an abundance of respect from the designers with which she works. The tenuous balance between cruel critique and constructive, albeit entertainingly sharp, criticism is a blend Suzy has perfected.

The topic arose over an inquiry into the ‘cancel culture’ phenomenon. The brutality of which poses a risk to creatives and audiences alike as historically critique has been a method by which creatives are able to curate constructive criticism in order to improve their future work. Today, however, this process appeared to be depleted in its efficacy. Suzy responded to say, “everybody now considers themselves a critic. You’re likely to see the comments and brutal, viscous words. Or perhaps nice words and enthusiasm from somebody who’s just putting it out somewhere without any background to be able to make this judgement.” Her words appear to be nostalgic for a time when critique was reserved for those whose opinion was devised with a modicum of research, and continued to note that with the increasingly accessible nature of the fashion industry it appears to be exposed to this level of scrutiny far more than its creative counterparts. Fine food, music, or art, for example.

The high octane nature of the fashion industry positions it at the forefront of many developments, setting it on a course for an immensely fascinating future. This future, however, needn’t cater only to the youth who have grown up into it. Suzy offers clarity on this misconception, that creative vitality arrives on the back of youth, to urge the fashion audience to recall the great artists who helped to mould the industry we know today.

Upon inquiry into one of her recent ventures, #SuzyPod, and whether its goal was specifically to engage with a younger audience, Suzy responded, “You know I never think about peoples age, I think about whether they’ve got energy” she continued, “I don’t think it’s about age. It’s about whether you’re still involved in your head. I mean look at Karl [Largerfeld]. He always seemed just as sharp with his comments then, at the age of 80, as he had done 30 years before.”

Suzy’s exuberance for her industry, and the artists with which she’s spent much of her established career, is expressed with perfect clarity. When absorbing the many pearls of wisdom she offers the impressiveness of her expertise is second only to the quick-wittedness of her delivery. Reminding us, once again, of the magic and the eloquence behind the fashion editor.

Stella McCartney to speak at the Condé Nast College