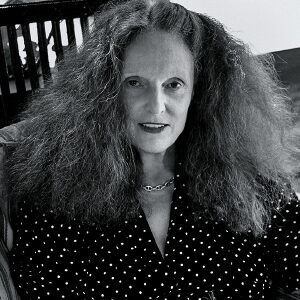 Grace Coddington’s remarkable contributions to contemporary fashion and image-making have shaped the public understanding of fashion as art. Grace holds the rare distinction of having worked with fashion’s most celebrated photographers both in front of and behind the camera. She worked initially as a model, appearing in editorials photographed by Helmut Newton, Norman Parkinson, and Guy Bourdin. In 1968, she joined British Vogue as a fashion editor, where she remained for nineteen years, rising to the position of Fashion Director and initiating her long-term working relationship with Anna Wintour. In 1988, Grace joined Anna at American Vogue. Grace’s on-set collaborations at Vogue have brought about many of the most iconic photographs in fashion history. In 2012, she published Grace: A Memoir, and in 2002  Grace: Thirty Years of Fashion at Vogue and 2016 Grace: The American Vogue Years. Marc Jacobs Illustrated features Grace’s illustrations of iconic looks from every Jacobs collection between 1993 – 2019. Grace currently contributes to both American Vogue and British Vogue.