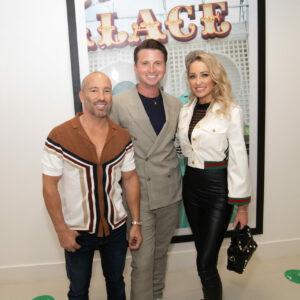 A packed audience of students had the chance to question Mary Fitzgerald and Jason Oppenheim, stars of the smash hit Netflix series, Selling Sunset, when they came to the London campus as guest speakers.

For anyone who hasn’t seen it, the programme follows the lives and careers of the real estate agents of The Oppenheim Group as they sell some of the most glamorous and expensive properties in West Hollywood. The stars are as spectacular as the houses they market. Mary and Jason shared the floor with host Josh Smith, Contributing Editor at Glamour Magazine and the man behind the hugely successful podcast, Reign with Josh Smith.

The glittering guests talked about branding and the importance of their personal fashion personae to the way the show functions and gave some significant insights into what pushes them to succeed.

Jason explained that he is no stranger to an educational environment as he is a former teacher, following in the footsteps of both of his parents.“I love getting in front of students and I did some teaching at Berkeley University in California in my law days,” he said, before adding that he would be delighted to make a second appearance at the College in the future to give a full lecture. He told the audience to make sure they found something they could be passionate about before making their final choice of career.

The worldwide success of Selling Sunset has had a significant impact on the cast members’ lives, and they all now have personal stylists to help accentuate the glamour of the programme. Jason said this was probably to his benefit and that of his brother Brett as he felt they were some way behind some of their fellow cast members in the fashion stakes. But he told the students things are going to change, “We’ll be bringing the fashion more in season six, you can count on that.”

He advised the students that if they wanted to be successful entrepreneurs that there is no substitute for having passion for your work and that attention to detail is critical.

“When I was a lawyer, work always felt like work, but as a real estate agent, I can do ten hour days and it still feels like fun. If you’re really passionate about it, it won’t feel like work and you can do it for twenty or thirty years.”

Co-star, Mary Fitzgerald strongly agreed. “If you have a passion for it, go for it,” she said. It’s such an incredible industry but it is also really hard and you have to be prepared to work and stay focused. You have to be a self-starter and be able to think outside the box and just keep at it.”

The cast members also explained to the students about how their lives had changed since becoming so widely known. Mary said, “For example, I never appreciated the power of social media before the show and now I realise just how much of an impact you can have through it reaching people all over the world.”

Mary said her understanding of fashion from a personal perspective had grown enormously since the first series.“I look back on some of the clothes I was wearing in some of the earlier shows, and I’m like,‘What was I thinking?’ Seriously though, you learn more about what to wear in terms of your body type and what looks good on camera.”

There is a further link between Condé Nast College and the programme. Their visit was arranged with the help of a former student who is now a vital part of the Selling Sunset landscape.

Head of Stakeholder Engagement at the College, Zoe Souter, explained,“We were very, very lucky because Emily Blair, who does the publicity for the Selling Sunset cast was the star student on a previous Vogue Summer Intensive course held here. She has created her own brand, Emily Blair Media, and she represents some really amazing people so we’re really proud of her. Her cohort were quite a group and they landed some brilliant jobs in the industry after leaving us. Jennifer Nilsson has gone on to become the Social and Commercial Media Editor at Vogue Scandinavia.

Students from previous Vogue Summer Intensive cohorts have been equally successful taking their studies further with us. Choosing our master’s and bachelor courses, Scarlett Baker is Editor-in-Chief at The Next Hour luxury watch website and also Editor of Man About Town magazine and Alice Morey is a Junior Editorial Associate for Condé Nast.”

In the audience was Panamanian student, Alexa Chacon, who’s studying for a Master’s Degree in Fashion Media Strategy. She said,“It was amazing; I think they’re great. They’re really insightful and really honest. I love how open they are about the whole process and what it’s like to be in a TV show but also as a working real estate agent I was interested to see how it had helped with the growth of the business being so much in the public eye.”

Jason and Mary admitted that when they first began filming for the show they never expected it to be such a smash hit, but that they were still enjoying the ride as they prepare for the launch of the sixth season.

Interested in enrolling on the same course as Emily Blair? Check out our Vogue Summer Intensive course