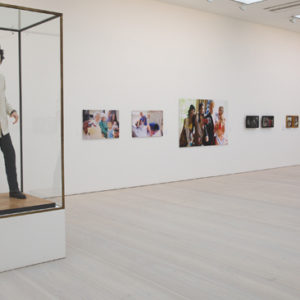 Thought to be illustrative of contemporary culture’s transition into the digital era, the ‘selfie’ – deemed ‘word of the year’ by the Oxford English Dictionary in 2013 – actually dates back over 500 years. Now metonymic for a generation arguably steeped in narcissism, perhaps epitomised by The Chainsmoker’s release of #SELFIE in 2014, the selfie has become the most ubiquitous means of self-expression.

The worlds first selfie exhibition, held at the Saatchi Gallery, tastefully explores an eclectic mix of self-portraiture following a vague chronology. Showcasing the works of historical figures such as Rembrandt, Van Gogh and Frida Kahlo, alongside those of Instagram sensations such as Kim Kardashian, who this week became the 6th person to reach 100 million followers. Despite both being displayed through Instagram-esq screens, the formers work conveys a depth and humanity unparalleled by the newer images displayed on the opposite wall. Irrespective of both essentially being innocent displays of vanity.

‘From Selfie to Self-Expression’ highlights in particular the creative autonomy afforded by the invention of the smartphone. Now an integral part of our lives, phone cameras were initially deemed unnecessary. An unworthy competitor of the DSLR/SLR. Increases in picture quality and resolution now enable us to create an intimate documentation of our every move, an estimated million selfies taken each day in 2017. The extent of this proliferation made comical by Alison Jackson’s curated celebrity selfie constructions, which marvelously satire their authentic precursors.

For part of the exhibition, the Saatchi Gallery and Huawei have commissioned ten young photographers, including Alma Haser, Tom Hunter, Christopher Nunn and Simon Roberts, to produce images of their surroundings using Huawei’s new P10 dual lens smartphone, co-engineered with iconic camera brand Leica. The photos, which will eventually go on display in a gallery dedicated to world-class smartphone photography, provide a refreshing contrast to the myriad of selfies.

The exhibition aptly juxtaposes the surreal and the hyperreal throughout, and despite the general consensus that agrees selfies to be a phenomenon of great inanity, they have been so imaginatively explored that their impact has become palpable. An indicator not just of one’s ownership of a smartphone, but also of ones perception of their own self and how they wish others to perceive them. A visual manifestation of ambitions, thoughts and experiences. A sanitised, authentic visual of our non-authentic, authentic self.