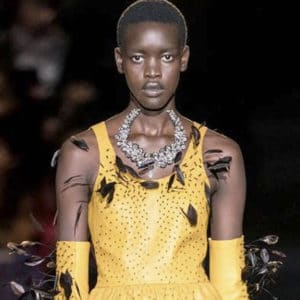 In a step away from the usual surrealist motifs of Elsa Schiaparelli, new artistic director, Daniel Roseberry presented a triumph of the fantastical at his debut haute couture show. Architectural plumes of vivid silk taffeta, fringed midis and billowing sleeves cascaded around the model’s bodies; while Roseberry sat centre stage in hoody and headphones sketching his masterpieces.

The American designer, who was appointed in April (he was formerly at Thom Browne for 11 years), had just two months to pull the collection togetherand took guidance from Schiaparelli as “a master of the modern” to create a collection that felt “relevant for today.”

The thirty looks were split into two distinctly different moods. A sombre, muted opening section with strong structured silhouettes of oversized blazers was followed by a bombardment of print and a kaleidoscopic colour. A focus on tailoring saw a 90s comeback with bralettes coupled by a varying of skirt lengths.

A resurgence of ruffles took the collection from the chic, considered, pared-down beauty to a walk on the wild side with an infiltration of snake skin and scales. An infusion of nature saw a bustier swarmed with jewelled ladybirds, an oversized ornamental serpent shaped necklace draped around the shoulders of a model in mesh and bejewelled lizard earrings caressing the shoulders. Perhaps a nod to the founder’s infamous Lobster Dress of 1937.

Italian surrealist, Elsa Schiaparelli founded the luxury fashion house in the late 1920s, with a strong foundation in innovation and a scorn for the serious but lately it had hosted a flurry of creative directors including Bertrand Guyon and Marco Zanini.

The Pavillon Cambon Capucines with its 10m high atrium provided the perfect back drop while key looks were accompanied by exuberant Stephen Jones millinery.