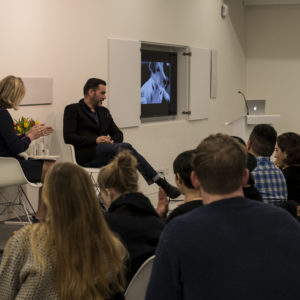 “I am sitting here in front of you today, but actually I am against college,” quipped Roland Mouret. He set the tone for what was to become an interesting conversation between him and principal Susie Forbes in front of the students at the Condé Nast College of Fashion & Design.

The French designer took far from a traditional route to become what he is today. Rather than starting in education, Mouret spent the early years of his career in Paris embracing the city’s nightlife. “I went out all the time, really,” he said. “In the 80s living during the night, was living fashion.” But it was not the right place for him. “Paris doesn’t embrace youth, what made it very difficult to live during the day.” He decided to move to London to build his career.

It is the woman’s body that takes centre stage in all of Mouret’s collections, always designing for the real woman, rather than his own ego or a small industry elite. It is likely to be the reason for his success on the red carpet. When a slide with celebrities and public figures like Kate Middleton, Blake Lively and Dita von Teese wearing his designs came up, Mouret smiled from ear to ear. “When I see this, I know I have done my job.”

His real success might have started in London, but he did not completely separate himself from Paris. Even though he claims to have become a ‘true London designer’ now, he still travels to Paris twice a year to show at the city’s fashion week. “I need competition and cannot find this at London’s fashion week where it’s all about the young designers.”

Despite the fact that Mouret never really regretted not going to college, the conversation ended with an educational tone. “Starting in fashion in 2015, harder or easier,” asked Forbes. “Easier, but you have to be in the now. Remind yourself that you have the right to change things, define fashion in a new way and do your own thing.”

Enchanted with positivity, students went to their next classes while Mouret left the building and experienced his first and last day in college.