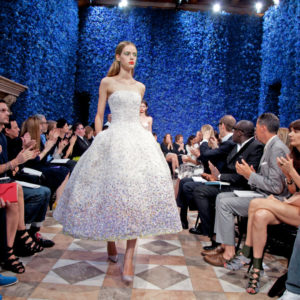 On the final day of college before our Easter break, my classmates and I were lucky enough to be treated to a screening of the recently released Dior and I, at the gorgeous Curzon Cinema in Mayfair.

Newly appointed Creative Director Raf Simons, fresh from minimalist ready to-wear label Jil Sander, has a mere eight weeks to complete his debut collection for couture house Dior. The film elegantly documents this delicate and high-stakes process, from Simon’s introductory day at Dior, to the climactic showcasing of his first collection. It explores the modernization of a brand notoriously steeped in heritage, whilst granting the viewer with an insider’s view into the rarefied and revered world of Haute Couture.

Director Frederic Tcheng, who was granted unprecedented access within the house, has managed to tread the fine line between detached observation and close examination of the subject and its central character. Using voice-overs from Christian Dior’s memoir, Tcheng draws an intriguing parallel between the hopes and fears of the respective designers, in the same high-pressure situation but with almost 70 years between them.

The film bypasses the common pitfall of portraying employment in the fashion industry as a narcissistic whirlwind of glamour, privilege and backstabbing. Instead, it charts the creative process of a highly talented and long-serving team, whose warmth and wit is a delight to observe.

Simons himself makes for an absorbing and complex protagonist. He remains quietly composed throughout the majority of the film, yet the rare cracks in this demeanor– Simons overcome with emotion as he thanks his staff, or explaining his crippling shyness to a colleague – feel intimate and sincere.

Although Dior and I documents the build-up to a fashion show, the film does not rely on a sense of frenzy, or allow the show itself to dominate the story. It manages to construct an engaging narrative around the lives of two visionaries separated by time, yet bound together by an unconditional devotion to their craft. Rich and considered in its context, Dior and I looks unflinchingly at what it takes – physically, mentally and emotionally – to create something truly beautiful. Every single one of us left the cinema feeling moved, uplifted and inspired.

Make sure to catch it while you can.