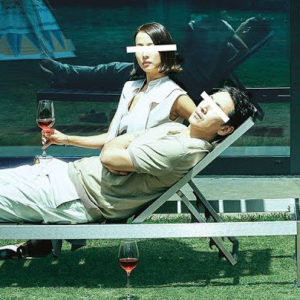 Situated in the heart of London, the Condé Nast College students are always out and about experiencing the many creative and cultural events around town. Here, MA Fashion Media Practice Student, Megan McClelland heads to the Parasite the Movie Q&A to get the inside scoop on this international hit movie.

“Bong Joon Ho has become a genre unto himself.” – Indiewire @agenreofone

With the Oscars coming up on 10th February, it means awards season is almost over.  Therefore we’re circumstantially expecting the nominees to be doubling down on their red carpet looks with more showstoppers like Arianna Grande’s Giambattista Valli gown and Lizzo’s classic glam Versace ensemble. Imagine Saoirse Ronan in a Richard Quinn dress…

Outfits aside, the nominations are unequivocally excitement inducing. Of these nominees is Bong Joon Ho, director of the Palme d’Or winning film: Parasite. The film has grossed a total of 177 awards around the world thus far and is predicted to accrue more at the Oscars, where it has been nominated for six awards, including “Best Picture.”

Screening and Q&A of Parasite

The Parasite screening took place at North London’s independent theatre, Phoenix Cinema. Organized by The British Film Institute the Q&A portion of the event was live streamed after the showing. During this, Bong Joon Ho and leading actor Kang-Ho Song were brought onto stage with his translator, Sharon Choi, to unpack some of the thematic and technical aspects of the film.

Preliminary insight was given to the audience, about how the film was originally going to be a play, since it is chiefly set in just two different homes in Seoul, South Korea. The centrality of the film has caused critics to speculate on how these homes were intended to glaringly juxtapose one another, holding a mirror to societal class tensions between the poor and the wealthy in the city, which is a common theme in Bong’s oeuvre.

Mapping out the dimensionality of the two homes was a critical part of the writing and directing processes for Bong Joon Ho. He intended to reveal the layers of the wealthy house slowly throughout the first half of the film. This gradual reveal was designed to educate the audience on the “geography of that house, in order to rage with the characters in the second half.” Paired with the other key elements of the film, like the cultivation of suspense and the theme of moral ambiguity, Parasite has been able to make an international impact amid the film community and beyond.

Bong characterises the film as “a comedy without clowns, a tragedy without villains,” which underscores the malaise of capitalism marked by dystopia that permeates through it. This is only heightened by his theme of moral ambiguity, since the cultural commentary is bereft of culpability or societal context. All in all, it’s a tepidly interesting angle to approach capitalism with.

Parasite is also one of the only movies set in current times, besides Marriage Story, that is nominated for Best Picture. Furthermore, it is the only film in the Best Picture category that is not centred around white characters. Critics seem split between whether or not the Academy’s decision to include Parasite into the nomination is diversity tokenism or an overdue show of appreciation for and interest in Asian Cinema. Despite this controversy, the film’s brilliance speaks for itself and has the international awards to prove it. Best of luck to all the nominee’s at the Oscars next week.