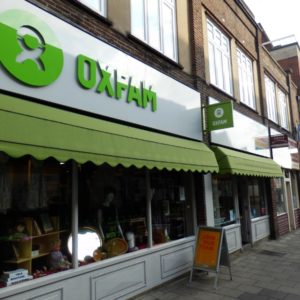 Briefed by the master of second hand shopping herself, Bay Garnett, an army of CNC students are now out on the hunt for the best vintage and designer items hidden away in Oxfam stores across London. There are high hopes for the uncovering of the perfect treasured items for Garnett’s upcoming show. For Oxfam oon the LFW schedule.

The visionary Bay Garnett was one of the very first stylists to bring second hand shopping into today’s mainstream world of fashion. She has long held a passion for the art of pairing vintage, thrift items with high end designers, a once innovative idea that has now become commonplace thanks to her.

Bay’s brief to use was both deliciously and terrifyingly broad – basically to get out to as many Oxfam stores as possible and to use our own creative eye to pick out possible catwalk pieces. Carden Jennings, a CNC Diploma student, reported that she discovered Dolce & Gabbana leopard print trousers and a vintage cropped beaded top in the Oxfam shop she went to on the Kings Road. “It took me three tries sorting through the same disheveled pile to find these items, but once I stumbled upon them, I knew they were the ones”, she said.

The students at CNC thank Bay Garnett for this opportunity to get out on the streets of London and help with the Oxfam show. Now we must wait and see if any of the treasures we found will be featured in the show itself -fingers crossed!