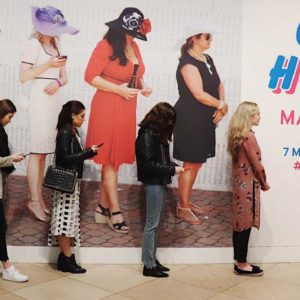 Martin Parr – Only Human exhibition at the National Portrait Gallery

Alice Morey reviews the exhibition and examines what it means to be British through the eyes of Parr.

A scrutinising glare at British patriotism or a celebration of the diverse individuals which come together as a collective to create Britishness. Martin Parr offers a colourful, raw and unapologetically eclectic image of what it means to British both before and during the Brexit era. A time which calls into question what is inherently British, what is adopted and what is an exaggerated picture of a by-gone age.

Parr captures adopted traditions which have become synonymous with Britishness from the cluster of people under umbrellas trying to stay dry from the almost inevitable Wimbledon showers; to the inter-generational pull of a royal wedding an excuse for dressing-up, community gatherings and bunting of red, white and blue. Imagery celebrates the collective and oneness through a series of indents for BBC One titled “portrait of modern Britain in all its diversity” from the colourful and polished Bangra dancing in the Welsh assembly rooms to the sludge and gloom of bog snorkelling. The exhibition celebrates the rich tapestry of what has come to be British. With nothing crossing over socio-economic or cultural boundaries more than the power of dance. A uniting force from the Scottish Cèilidh to celebrations at a Sikh wedding. The focus may be on the individual, but it is the collective which is acknowledged.

Burning reds and vibrant oranges cut through the images giving a unique and unequivocally Martin Parr touch, often a go-to for celebrity portraiture. One image which unites the political challenging eye of Parr’s work and embraces the individuality and personalisation of the subject is the Vivienne Westwood image, in a stark clinical bathroom. Dressed in a white slogan tee with the words ‘Climate Revolution’ coupled with a pair of laddered, striped opaque tights over a pair of shorts, topped off with gold scaled 70’s platform heels. Perhaps a nod to her wild child youth and origins within the punk movement, or rather a suggestion for the need to act, calling people to arms, when it comes to concerns with the environment. Parr took the portrait in 2012 at a time where a resurgence and mainstream notoriety was recognised surrounding the threats which jeopardised the ecosphere and the need for a change to occur. Is the composition suggesting that if immediate action is not taken then the future of the environment as a result of climate change goes down the toilet (quite literally)?

Leaving the exhibition, you are left with a feeling of nostalgia, humour and questioning Parr’s stance on whether the projection of Britishness in the UK is a good or a bad thing. One thing which is abundantly clear is Britain is made up of a vast and eclectic group of people who have all enriched our society and brought their own individual traditions and carried others on. Parr offers a colourful, raw and unapologetic look at life a window into a moment of time and a must-see exhibition for Spring 2019 at the National Portrait Gallery.

Find out more about our BA Hons in Fashion Communication