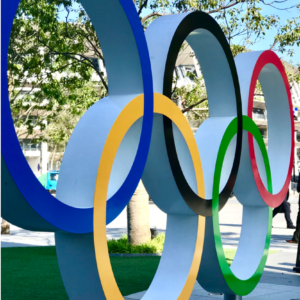 CNC looks back at the Olympic fashion moments setting a new standard, that expands further than the sports arena.

On the final day of the Tokyo 2020 Olympics, Team GB finished the games fourth on the medal table with a total of 22 gold, 21 silver and 22 bronze medals. However, it was scenes of Gold medal winning Olympic diver Tom Daley, knitting poolside that captured the imagination of the world and provided nostalgic reminiscing of home-craft from lockdown life, while the empowering scenes of the German women’s gymnastic team in their full unitard came as a breath of fresh air and positive marker against the decision to fine the Norwegian women’s beach handball team for wearing a bike short at the sport’s previous Euro 2021 tournament.

While many of us abandoned DIY clothing in favour of store re-openings, Daley perfected both the pearl stitch and the back three and a half somersault pike, much to the delight of Olympic onlookers. The aforementioned Tokyo cardigan, with the inscription of the word “Tokyo” written in Japanese on the front, ‘GBR’ on the right shoulder, the Union Jack on the left and the Team GB logo on the back with the five Olympic rings, was unveiled by Daley on his secondary Instagram account @madewithlovebytomdaley to a total of 1.3 million followers. The cardigan has already accumulated more than 500,000 likes and will, in time, be auctioned off to raise money for a brain tumour charity in memory of his father Robert.

Daley has used his platform and status as one of the 182 openly LGBTQ+ athletes competing at the games, to raise awareness. In a post game interview he explains how progress has been made, in terms of representation, yet there is still a way to go, explaining that “there are 10 countries that are competing at these Olympic Games where being LGBT is punishable by death”. “I feel extremely lucky to be representing Team GB, to be able to stand on the diving board with myself, with a husband and a son, and not worry about any ramifications,” Daley said. “But I know that I’m very fortunate to have that and that there are lots of people that grow up around the world with less fortunate situations”. The importance of these comments was highlighted further by Russian state television using extremely offensive language questioning the participation of LGBTQ+ athletes.

Clothes have historically been used as devices to make a political statement and the sports arena is no different. Upon entering the games the Norwegian women’s beach handball team had been fined 1,500 euros for not playing in bikini briefs at the sport’s Euro 2021 tournament. The team wore thigh-length bike shorts in protest against the regulations which insist on women wearing a sports bra and bikini bottom “with a close fit and cut on an upward angle toward the top of the leg” – despite the more relaxed uniform regulation for the men’s team. Unsurprisingly outrage was felt beyond the sport and captured headlines, with these rules being branded as “outdated” and “sexist”.

It was then apt that the German women’s gymnastics team opted to wear full-body suits in qualifications at the Tokyo Olympics, in a move that the team described as promoting freedom of choice and to encourage women to wear what makes them feel comfortable, “we wanted to show that every women, everybody, should decide what to wear”.

Read about how the Vogue Foundation  students prepared for the exhibition