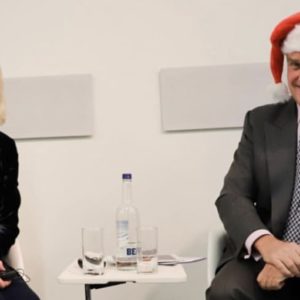 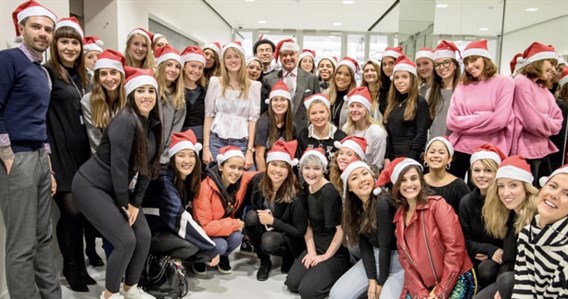 Our principal, Susie Forbes, introduced Nicholas and began by reading his credentials, which as well as being Chairman of Condé Nast Britain, include having previously been the Managing Director at Conde Nast International, Chairman of the Victoria and Albert Museum, Chairman of The Prince of Wales’ Campaign for Wool and Chairman of the Gilbert Trust for the Arts. Nicholas is also a Patron for the Elephant Family and an Ambassador for the Landmark Trust. He is the author of twelve books, both fiction and non-fiction. He has four children and seven godchildren, two of whom include models Cara Delevigne and Edie Campbell. In 2009, he was awarded the CBE. Nicholas studied at Eton and Trinity College, Cambridge alongside the Archbishop of Canterbury, Justin Welby. So… on to what happened when the man of many hats visited CNC…

Just a snippet of the incredible insight we got into Nicholas’ colourful life, he began by regailing the time Elton John turned up in a gold Rolls Royce to the Contemporary Arts Society dinner at the cockpit at Eton. This was quickly followed by him describing how Vogue used to assist Princess Diana with her clothes shopping by calling clothes in as if they were going to be photographed (and very often they were). If Diana liked them, it would be arranged that she would buy the items. Susie added that this was long before anyone had a personal stylist!

One of Nicholas’ first jobs was working for Tatler and, soon after he became editor Tina Brown’s deputy. Nicholas described how, through working with Tina Brown, he learnt about ‘shoot from the hip’ journalism, an expression used to describe what a writer thinks of the person they are interviewing, and the importance of writing something that stays in the mind of the reader. He went on to tell us about the expression ‘Ey Doris’, a reaction that would generally be provoked by a tabloid that made a reader sit up and say to his wife ‘Ey Doris – listen to this!’ Nicholas outlined the importance of taking out superfluous ‘filler’ words when writing. He advised us to focus on ‘fast writing’. The idea of ‘fast writing’ seems so relevant in the society we currently live in, where instant gratification is observable in everyday life, and being captivating (and captivated) as quickly as possible is imperative.

Nicholas informed us of his own media consumption; he enjoys glossy magazines, The New Statesman, The Economist and The Spectator. He also talked about today’s ‘fractured viewing’ – how there is no sense of commune anymore – and related this idea to streaming services. In contrast to when he was eighteen and there were only three channels on the television, family members can now be scattered about the house, watching many different things at once. Nicholas said that due to the rapid growth of technology, he suspects that soon there will be a 50/50 split between magazine consumption in a digital form, and printed form, compared to the current 89% revenue made from printed magazines.

Nicholas himself is amiable and enthusiastic, and an incredibly engaging and entertaining speaker. He is definitely one for the fantasy dinner party guest list – the hour that he spent with us truly flew by! The important thing many of us took away from the talk was that a person is capable of as much as they want to be – our generation must set goals, not limits. Often the question is asked ‘What do you want to be or do?’, but particularly in this day and age, we needn’t compartmentalise people in this way. Nicholas Coleridge does a multitude of things at once and there truly isn’t shame in it. It certainly makes for a fascinating individual!