Michael Jackson: On The Wall 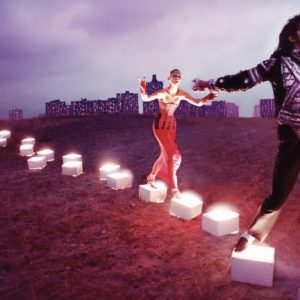 Almost a decade after his death and a couple of months before his 60th birthday, the National Portrait Gallery explores the endless fascination with the King of Pop.

‘Michael Jackson: On The Wall’ brings together the work of 48 artists from different generations and genres from Andy Warhol to David LaChapelle and tells a previously untold story of the pop star’s influence on contemporary art.

Michael Jackson was one of the most influential pop cultural figures of the Twentieth Century, a trail-blazing singer, musician, performer as well as fashion icon, and the show illustrates why he has become one of the most depicted cultural figures in visual art too. Jackson broke records for most albums sold and awards won but he also remained a towering cultural presence over his four-decade career. But for curator and director of the National Portrait Gallery Dr Nicholas Cullinan, his impact on contemporary art is an untold story. “Michael Jackson: On the Wall takes an entirely new and quite radical approach by exploring the cultural impact of a unique figure through contemporary art,” says Cullinan. “It is rare that there is something new to say about someone so famous, but here, that is the case.”

The show brings together works drawn from both public and private collections around the world, as well as 11 new works made specifically for the exhibition. It gives visitors the opportunity to come up-close and personal with pieces from artists such as Jackson’s friend and renowned artist, Andy Warhol, Graham Dolphin, Kehinde Wiley and Dawn Mellor. And the intense experience prompts us to ask why Jackson has been a subject for so many artists.

A significant piece that will be displayed for the first time in the UK, the Equestrian Portrait of King Phillip II (Michael Jackson) by artist Kehinde Wiley, was commissioned by Jackson before his death and finished posthumously. Kehinde describes his experience working with Jackson as “extraordinary. His knowledge of art and art history was much more in-depth than I had imagined.”

The exhibition highlights endless iconic Jackson moments – including infamous Thriller album cover of 1982 in which he wore a white Hugo Boss suit. The German brand is releasing a capsule collection to celebrate what would have been Jackson’s diamond (60th) birthday in August.

What I learned from my internship at British Vogue