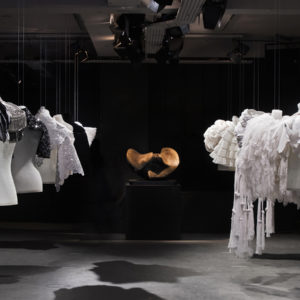 A stones throw from The Condé Nast College, held in the former Foyle’s bookstore site off Charing Cross Road, Burberry’s Makers House returned for a second time this February. Famous for its gabardine trench coats and characteristic tartan pattern, Burberry was founded in1856 by an entrepreneurial 21-year-old drapers assistant, Thomas Burberry. Over the past decade, under the direction of Chief Creative, Christopher Bailey, Burberry has become synonymous with innovation and cutting edge digital retail. Their February 2017 collection is no exception.

Unconventional proportions, abstract deconstruction and a primitive muted color palette, employed in equal measure to both mens and womenswear, reflected the collection’s predominant inspiration, Henry Moore. The runway show, also held at the Makers House, was serenaded by Anna Calvi. A set, I found that compounded the impact and effectiveness of the collection as a whole, authentic and raw in it’s execution.

The shows finalé, an extensive collection of dramatic and intricately detailed capes, were displayed alongside Moore’s sculptures on the Makers House’s lower floor, attracting both fans of art and fashion alike. Upstairs, alongside a VR film which took the viewer into Moore’s studio, lay an elaborate visual explanation of the process behind the collection, including some of Moore’s early models and sketches. 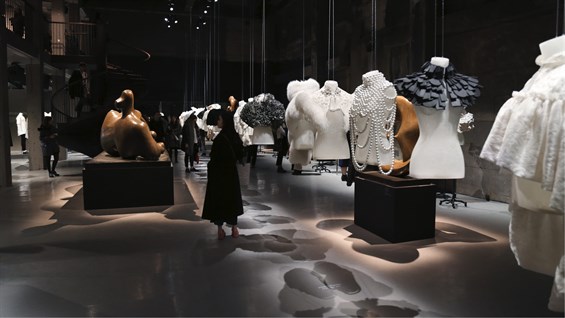 Despite fashion often being thought of as transient, the influence of Henry Moore, as one of Britain’s most iconic sculptors, added a feeling of permanence to this collection. Representative of the traditionalist thread integral to Burberry’s brand, Moore enabled the collection to transcend both time and place. The dark bronze opulence of the sculptures provided added decorum to Burberry’s work, where simplicity and grandeur were displayed together seamlessly. Their juxtaposition against the beautifully adorned mannequins affords them, in turn, a freshness. Essentially Bailey has fostered a symbiotic relationship between Burberry and Moore, who coincidently was born in the same village (Castleford) as Burberry’s trench coats are produced.

Unlike a normal retail environment which often provides a purely transactional experience, the Makers House offered a context to the collection, creating a narrative with the onlooker by illustrating the means through which Moore’s sculptures, and other less practiced parts of his life, influenced the collection. The silk dresses covered in paint splashes for instance, were inspired not by Moore’s work itself but by his resulting stained blue art robes. Bailey believes the Makers House affords individuals the ‘deeper relationship they want with, not just fashion, but with everything they are doing today.’

Moore’s sculptures, which are often simplified abstract depictions of the female body, seem particularly significant in the current climate. Female liberation and feminism as a whole, was a repetitively salient theme throughout other February ’17 collections. Comparatively, at brands such as Prabal Gurung and Dior, slogan T’s sent an arguably more overt message of protestation. Nonetheless, I viewed Moore’s sculptures as similarly effective, reflective of Burberry’s understated, pioneering and quintessentially British character.

The entire concept of the Makers House illustrates a very democratic means of showcasing collections. Sadly, the building housing Makers House is due to be demolished, thus this collection marks the last of its kind.

It has been said that Bailey is unsure how Burberry’s next collection will be displayed. However, I am in no doubt that it will be equally as exciting and that his uncompromising aesthetic will remain unfaltering.