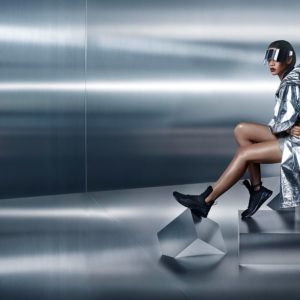 We live in a time in which fashion collaborations are always on the agenda, but what makes some stand out in a very crowded market? At the international collections this year, these serendipitous partnerships have provided some of the most interesting moments.

They might also be providing a mini revolution; after the “see now, buy now” frenzy (already abandoned by the majority of designers (Tom Ford is a great example of it), luxury brands are making partnerships with iconic streetwear brands, giving customers exclusive capsule collections and accessories.

There was Vetement for 18 different brands among which COMME de GARCONS. Supreme for Louis Vuitton, or the first urban brand collaborating in luxury. Manolo Blahnik, Tommy Hilfiger and Levi’s were present. Alexander Wang for Adidas selling jackets, sneakers, t-shirts and polos. Raf Simons for Peter Saville but for adidas as well, giving its own vision on sportswear, maintaining a minimal and clean concept, but many others too.

And now shops are also collaborating

Colette, the well known concept store located in Rue Saint Honoré in Paris, announced its own take on collaborations, dedication its last floor to collaboration with a different brand every month ahead of its closure this December.

This is not all: celebrities and super models such as Gigi Hadid, Kylie Jenner, Travis Scott, Kanye West and many others have embarked on the same path, becoming designers just to collaborate with the biggest brands. Who never heard about Tommy x Gigi or Fenty Puma x Rihanna? Designers gave the opportunity to create apparel to these celebrities, making strategic collections that were an instant sellouts.

There is also to say that fashion collaborations are driving social networks. People can find them on street-style pictures, on official celebrities and designers accounts, and also on music videos. A perfect example for it could be the last Supreme x Louis Vuitton collection; as everybody can see, it’s been weeks now that is dominating the social media platforms.