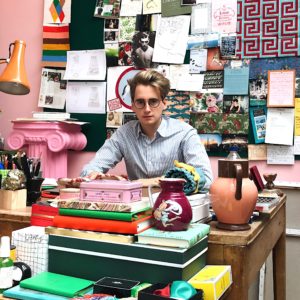 Inside Luke Edward Hall’s Camden studio everything is in technicolour. From the bubblegum walls to the bright pink ionic pillars, to the tangerine anglepoise lamp to the red and turquoise Greek key patterned papers on the mood board behind his desk. Hall’s studio is an encyclopedia of culture, history and lifestyle, drawing inspiration from Italian, Greek and ancient Egypt art, mixed with his fresh British aesthetics. His reference books are piled up at every corner of the desk, as are vibrant fabrics and antique ceramics.

Luke grew up in “totally fine but pretty boring” Basingstoke, and burst onto the fashion scene when he established his own studio in 2015. As an artist and designer of interiors, fabrics and ceramics, he has quickly gained attention from L’Officiel and Vogue, who named him a ‘wunderkind’. He graduated from Central Saint Martins in 2012 after studying menswear fashion design, but is now the ‘It boy of surface design’. His pure line drawings and use of bright colours make his designs stand out. “I always describe my style in the same way: Greco-Roman meets crumbling English country house, with a dash of Palm Springs,” he said recently. 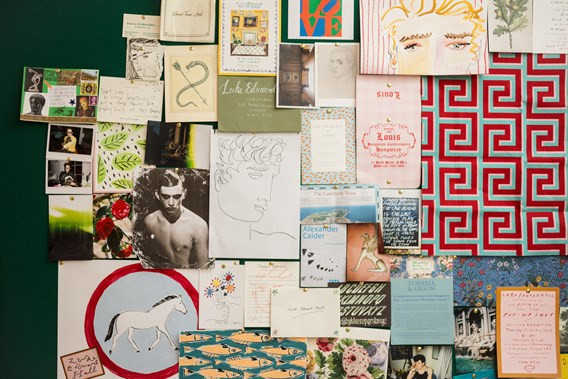 His own inspiration comes from a series of artists, including David Hockney, Picasso and Jean Cocteau, but he looks outside the arts too. The BAFTA-winning film director, Wes Anderson, whose film The Grand Budapest has great similarities to his pink-walled studio – a colour that is clearly central to Hall’s world. “Pink is my favourite colour and it’s a bit annoying really because of the whole millennial pink thing which is happening at the moment”.

During his degree, along with two friends, he ran a thriving online antique shop, from 2011 until 2013, opening pop-up shops in London and New York City. “I think it’s important to have other stuff going on outside of your studies. Eventually you will gain traction, and people will be interested in what you are doing, but it doesn’t happen overnight.” Outwardly Hall’s stellar rise looks exactly that, as now aged 27 and just two years after opening his studio, he is collaborating with a long list of established fashion brands.

Last year, he joined forces with Burberry, interpreting Mario Testino’s campaign images of the supermodel Edie Campbell in his romantic and nostalgic style. His illustrations ran alongside Testino’s images in the ad campaign. Last summer he worked with Alex Eagle to design a collection of hand painted plate and platters titled ‘Friends’. He also participated in the exhibition Young Bright Things at the David Gill Gallery. In September he was the creative visionary behind Christie’s Young Hearts exhibition — a curated display of works by contemporary artists under 40.

All this alongside his colourful patterned cushions, plates, line drawing illustrations that he sells on his website. He enjoys having a 360-degree overview of his business. “I wanted to do graphic design at one point when I was younger, and I have always been interested in advertising, branding and typography,” he says, “I also quite like doing the business-side. It’s quite satisfying to keep on top of all that stuff.” However, there is the sense that the process must be a lonely creative existence, “I work completely by myself. It’s sometimes a bit difficult to know what projects to do, and what projects not to do.”

Being a young, good-looking artist with messy blonde hair, geeky glasses, smart attitude and a large social media following comes with great perks. In June, he became a part of the Dolce & Gabbana family, consisting of the most powerful digital influencers in the industry (also known as #DGMillennials), as he walked the Kings of Heart Spring/Summer 2018 menswear show in Milan. “It was quite nerve-racking,” says Hall who looks nothing short of terrified on the catwalk in his illustrated short-sleeved shirt paired with black cigarette trousers, embroidered loafers and a patterned handbag. “I had a fitting with Domenico. He is very charming, and I like the aesthetics of the brand. Very maximalist, quite fun.”

This is not the first time that he has modelled. He modelled for a Dazed & Confused shoot by Hedi Slimane back in 2008, in a tiara and pearls. Next on his hit list is the iconic fashion photographer, Tim Walker, who is another inspiration of his. “I would love to have a portrait by Tim Walker. That’s my dream.” 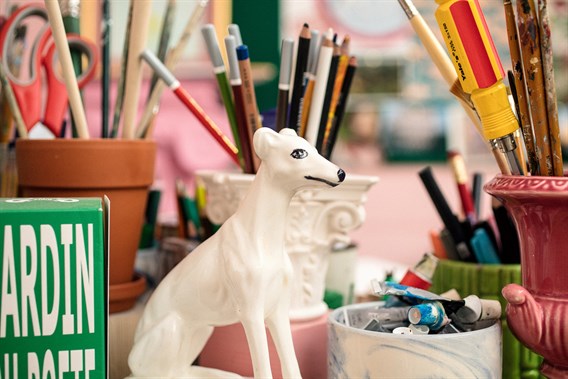 He has collaborated with Drake’s on an exclusive range of pocket squares and ties. He will also be partnering with a slipper brand later this year and also work with another brand on jumper and knitwear design. Would he ever consider tapping into menswear again? “I wouldn’t say that I wouldn’t do it. I think it would be quite fun.”

Luke’s relaxed approach to his success is common of the millennial generation, as he seems highly focused on having fun and being passionate about what he does. When I asked about the future of his brand, he says, “That’s the thing that is fun at the moment, because I don’t completely know. I’m sort of going to wait and see.” As for his personal goals for the future, “I think I’d just like to continue doing what I’m doing really,” he continues, “I would like to have moved to the country and have some dogs and kids and a vegetable garden.” For now, he just released a small selection of original drawings, paintings and ceramics at Liberty, with more projects in store for the future.