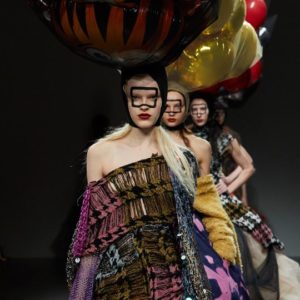 From the North Yorkshire moors to the runway, Matty Bovan makes his debut at London Fashion Week with Fashion East…

Bovan’s A/W18 collection named ‘Vigilamus’ was initially based on the North Yorkshire Moors at dusk, which is reflected in the earthy brown and twilight violet colours. The dominant houndstooth check seen throughout the collection came from the influence of his late grandmother’s wardrobe of tweed suit but with a post-apocalyptic take on the proper fabric leaving hems and edges ragged and raw.

Supermodels Adwoa Aboah and Winnie Harlow opened and closed the show in natural makeup with bold geometric pops of colour and static rectangles across the eyes to echo the collection.

The most noticeable takeaway from the show was the tulle-wrapped helium balloons atop of the models heads, which caught the attention of the audience who all snapped pictures of the avant-garde looks. The headpieces were specially made by Stephen Jones and recalled winter wear required for sunset walks along the chilly moors. He told British Vogue that the balloons reflect “the idea of carrying the weight of the world”.

His signature square shoulders, fin-shaped backs and rectilinear necklines returned but with cinched waists, following the line of his grandmother’s tweed jackets. “In previous seasons, as the day of the show has approached, I’ve looked at the collection and tried to pull it back from the extremes that I tend to go,” Matty Bovan says, “But this time I haven’t held back at all.” It is a good thing that he did go to the extremes, as his collection stood out this season and was an excellent way to debut his work at London Fashion Week. Watch the show finale below: