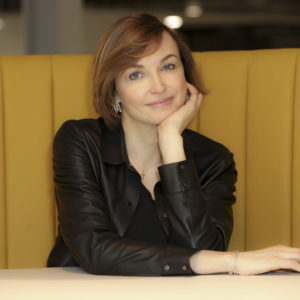 Discussing the evolution of the Vogue cover, Karina Dobrotvorskaya, Executive Director of Editorial Development at Condé Nast, joined Condé Nast College via Zoom for an immersive industry talking on the history and the cultural impact of the Vogue cover.

The prominence of the Vogue cover has long dominated the media landscape of the fashion industry. Its role has been varied, to capture the mood of the zeitgeist, to provide a space of escapism, and to reflect the truths and happenings of society. For Executive Director of Editorial Development at Condé Nast, the relevance and responsibility of its cover has never proved more fundamental.

After earning a PhD Theatre History from St. Petersburg National Academy of Theatre Arts, Karina embarked on her career with Condé Nast at Russian Vogue in 1997 as the Arts and Culture Editor. Working on a variety of brand publications, she later became the Editorial Director for Condé Nast Russia.

In 2012, her success continyed as she won Best Contribution to the Russian Fashion Industry. In the same year she was moved to Paris to create a new department of Editorial Development of Brand Development supervising new launches for Vogue and other titles. She became the President and Editorial Director of Brand Development, during her time in this role she has launched nine Vogues, and will soon launch her tenth with Vogue Scandinavia.

The Evolution of the Vogue cover

Karina uses her background as a historian to weave together the story of Vogue covers.  As she is currently recovering from COVID, she remarks on the ways this pandemic has created space for Vogue, and other brands, to reflect, recreate and analyse themselves. “This change is tectonic; it is really huge and we should not underestimate it.” She shared the way the iconic covers of Vogue have changed, will continue to change, and evolve.

“This change is tectonic; it is really huge and we should not underestimate it.”

Building on the legacy of Condé Nast

After he bought Vogue, Vanity Fair, House & Garden, Condé Montrose Nast’s mantra was “Class, not mass.” Unpicking the words of the publication house’s founder, Karina notes how the precedence of digital reflects this statement, and the transition the media industry has seen since the beginning of the twentieth century. “Everything is going digital, which is about numbers and scale,”  reflects Karina who, when she initially started out working the eponymous glossy magazines, the standard was one cover. With that came a set of rules that defined a successful cover from one not so. For instance, between Vogue and Cosmopolitan, models were encouraged to look smiling and inviting, typifying an image of ‘perfection.’

The trend over the last ten years has been the use of multiple covers. For instance, the revolutionary and at times controversial, vision for covers by previous Vogue Italia Editor-in-Chief Franca Sozzani. Karina shared how Franca created impactful covers like the Black Issue, July 2008. “As we reflect back this may feel old fashioned but at the time it was revolutionary.” Karina argues that Franca’s genius with multiple covers came from clear conceptual covers. The first cover supports the second and then the third because every cover supports the next to create a whole. She goes on to share this process and focus is still successful today with Vogue Italia, a great example of a clear concept is their September 2017 issue. Multiple covers create an opportunity to create a story and narrative of a particular issue.

Today we see that brands create multiple covers not only with the emphasis on concepts but with the desire to gain more clicks online. Referencing the uses for multiple covers, Karina offered  an interesting take on Vogue China cover creating a user-generated multiple cover layout. “We are in a time where everyone has a voice.” This provided space for users to create their versions of the cover and one was selected for print. This concept was clear and successful. However, not having a clear concept has led to confusion from readers. Karina warned there have been instances where a brand will create multiple digital covers to post on Instagram but not provide readers clarity that they do not print those digital covers– which leads to more confusion.

The Digitisation of Fashion Media

Before Instagram and the internet the first time people saw a Vogue cover would be on a newsstand. Covers traditionally had many cover lines because they had to compete with other magazines. She emphasises we see today the decline and, in some cases, complete absence of cover lines on covers. She presented example covers to students about why it works to have no cover lines for statement conceptual covers.

Vogue Portugal has always tried to be extremely conceptual and created a parody meme cover with comedian Celeste Barber for their August 2019 issue. This parody cover ran alongside their Irina Shayk photoshoot. She noted that there has been debate about whether this was the right move for Vogue Portugal. However, It has shown to be a success with almost no negative comments on social media.

Covers are the representation of fashion messaging and many brands use social media platforms to showcase their covers. There has been a return of poster covers. “There is one second to be engaged, so he image should be striking. Colour-wise, message-wise and cover line”. She stressed the issues of having too many cover lines because no one will be able to read them. “The decline of cover lines can be linked to the rise in social media” she went on. As more covers forgo cover lines it is essential to align the Vogue DNA and the fashion message. She challenged students to reflect on conceptual covers that have no clothes and the contemplation of a new angle about fashion and sustainability. She reiterated, even as covers evolve it is important to stay aligned with the Vogue DNA.

The importance of capturing the zeitgeist

Karina came full circle with history, teaching students that fashion photography covers came during the 1930’s. Before the 1930’s Vogue covers were all illustrated. In 2020 during COVID, magazines had to come up with creative solutions for covers. She shared beautiful illustrated covers and covers with digital effects featuring digital models and clothes that came out during 2020. She told students “…we are in a different vibe…people believe that Vogue shouldn’t be too distant, too cold, too perfect anymore”.   We are seeing a shift in delegating perspective with people on covers and pushing design boundaries. Karina shared covers that bring a new age of gender-bending, activism and covers like Kamala Harris where she wears her own clothes. These covers are deeply personal, and show so much individuality.

Learning from Karina provided a historical perspective for our students to actively engage with when understanding Vogue covers, and the way they provide impactful meaning. After sharing her experience and insights with the students here are some key takeaways:

Find out more about the Vogue Foundation Programme