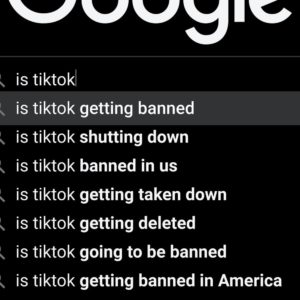 It’s the app reminding everyone of the good times of Vine. The dancing and lip-syncing app is brightening people’s days but why then is there possible controversy over its success? And is TikTok getting banned? MA student Heather Texter reviews the news and shares entertaining profiles of the app.

TikTok is all the rage as millions of people turn to the fairly new social media platform to take on challenges and create the latest obsession in meme-making. The application has equally played an entertaining role for many people to join in on during the pandemic.

A hot topic that has risen lately around the platform is its possible ban being discussed in the U.S. An interesting piece of news considering that largely, in a country like the U.S. it’s not something you commonly hear about. The United States Secretary of State Mike Pompeo was the one who raised the current discussion on a possible ban of TikTok after mentioning it in a recent interview.

This comes as both the U.S. and China have faced more tension with each other. Resorting to the fear that in some way, China may be surveilling or even influencing Americans who have downloaded the app. In comparison, India recently made the decision to ban the site stating that it was “a threat to sovereignty and integrity.”

Seeing as a ban may not go over very well, considering many people are enjoying being able to make fun videos, a few senators in the U.S. mentioned possible censorship being adapted within the platform. The call for censorship has been a large topic itself in recent years as not only governments but private companies have taken action on what content is allowed online, especially on social media platforms. Many social media companies like Twitter have taken it upon themselves to try and do their part in ensuring appropriate and factual content is online. However, it has also brought its own attention to concerns that the removal of images, videos, or comments which people feel is appropriate may also end up being removed.

The Concern of TikTok Itself

Moving attention back to the news of banning TikTok. The social video application continues to grow in popularity. It has reached over 2 billion downloads worldwide through the App Store and Google Play. Sensor Tower’s Store Intelligence Data Digest reported in Q1 for 2020, the app reached more than 315 million downloads alone.

The main reason for the U.S. officials’ possible concern is TikTok’s parent company ByteDance is based in China. Yet, the platform itself is led by an American CEO. Reviewing other reports on this news, a spokesperson for TikTok stated, “We have no higher priority than promoting a safe and secure app experience for our users. We have never provided user data to the Chinese government, nor would we do so if asked.” But, as these new concerns are raised, it has led TikTok executives to actually discuss possible changes such as relocating their headquarters.

It seems like this would be seen as some fake news about an actual ban on TikTok. However, with an app receiving so much success in such a short time span, U.S. and others like India, have felt that there may actually be a cause of concern with its influence. Generation Z especially have found a love for the fun platform in recreating videos and dance challenges.

It’s not just younger people joining the app. With so many people flocking to it, brands are also seeing its interest and have started to experiment with how they can join in. Furthermore, because the majority of the content on TikTok is about recreating content, it’s a great way for brands to make a stronger connection with followers.

TikTok is still fairly new and many brands and companies are still slowly joining and figuring out how to entertain people. Moving past the news of a possible ban, the social video app has made for some worthy fun clips and most definitely dance challenges to take part in for some lighthearted fun.

The Condé Nast College itself has recently joined the platform in a bid to showcase student life on campus. Be sure to check our account out @condenastcollege.

Plus, here are some great accounts to view for a little slice of entertainment.

Worthy to check out their own profile for new features and mentions of other great accounts to follow.

Throwing it back with nostalgic clips from past shows and keeping viewers entertained with newer shows.

One of the top most popular influencers sharing lip-syncing videos among others such as challenges.

Previously had a successful Vine account. He now has taken to TikTok with his illusions and magic tricks.

Seizing on a chance for making a viral moment and some fun. Many of his videos are lighthearted and equally entertaining.