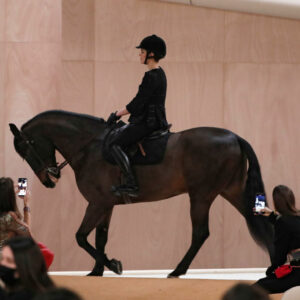 The haute couture show was “suspended, fresh, and feminine”, bringing bright floating silhouettes in contrast to the structured geometric setting, accredited to artist Xavier Veilhan. Viard reached out to Veilhan inspired by his installation work for Chanel fine jewelry 15 years ago. The setting featured giant spinning discs and sand filled walkways made from sustainable plywood “evoking equestrian curves and constructive lines”. The installation incorporated Chanel’s iconic palette of black, white, and beige, setting the scene to purposely go against the dainty embroideries that are Chanel’s métier. 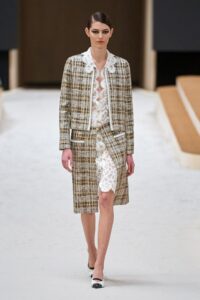 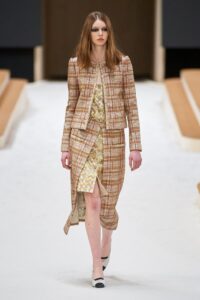 The ‘ethereal lightness’ which Viard described the collection as, was portrayed with jewelled halter satin evening dresses (Look 25- picture ). Multiple evening gowns floated down the runway with layered silk fringes, trimmed with colourful beads and dyed ends. On sheer fabric, flapper-style fringed dresses with ostrich feathers and threads of orange, emerald, mauve, and lilac crystals gave the ultimate Golden Age glamour. A black organza dress, hand-painted pink and lilac flowers and a trail of fine silver threaded pearls was paired with a dark pink suit jacket. Albeit an unconventional pairing, the detailed craftsmanship – from the jewelled buttons of the jacket to the sheer, airy skirt underneath – is a perfect example of Viards ode the classic Chanel combined. 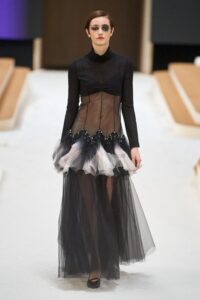 However, the show came under criticism surrounding the horse-riding entrance, with claims that Chanel was exploiting animals for clickbait and shock value. Instagram fashion critique account Diet Prada argued “when a horse is the most interesting thing at your [Chanel’s] couture show, it’s time to reevaluate the collection”. Additional critics spoke about the model’s eye makeup and its misinterpretation from “Pre-War avant garde” to glamorising domestic abuse. These accounts said Chanel should be held to a higher standard being a historical well-established fashion house, debating that aspects of the show should’ve been thoughtfully reviewed pre-production. Hamish Bowels noted in his Vogue article that because of the “socially enforced distance”, the presentation of the fine detail on the garments was lost. The intricate, exquisite details credited to the Chanel ateliers and artisans were only visible backstage as the venue and attendees were spread out, further highlighting the continuing effect of Covid on fashion shows.

Despite criticism of the show, it is important to notice and admire the meticulous detail in Chanel’s embroideries, feathers, flowers, and handwoven tweeds. Chanel’s spring ‘22 haute couture collection perfectly portrayed “ethereal lightness” in contrast with Veilhan’s installation. Viard’s vision of a floaty, fresh, and femine fantasy mixed with reality came to life through these pieces.