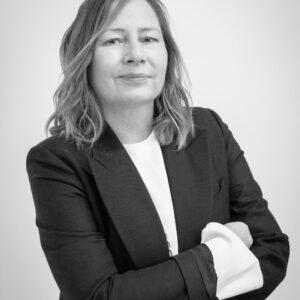 Condé Nast College of Fashion & Design were delighted to welcome Sarah Mower MBE, Chief Critic at vogue.com, CNC Advisory Council member and BFC Ambassador for Emerging Talent, as a recent industry speaker. In conversation with BA graduate Alice Morey, they touched on Sarah’s illustrious career, the evolving role of a fashion journalist and her passion to nurture the next generation of talent.

Sarah Mower is internationally acclaimed for her forthright and decisive critiques, with commentary based in research, and a perspective that extends beyond fashion. Sarah has a regular column for both American and Japanese Vogue and has written for the likes of US Harper’s Bazaar and The Times.

Sarah’s entrance to the fashion industry was one of chance, although there were early signs that foreshadowed what was to come. Born in Bath, a city rich in history, Georgian architecture and a fashion museum, both of Sarah’s parents were teachers, and from an early age, encouraged their children to read broadly and be creative, given that their house had neither a telephone nor a television. In Sarah, this prompted an inquisitive curiosity for the past and, in particular, a fascination with “what people wore”, which later informed her studies at school where she would, much to the dismay of the teachers, “illustrate essays with what the peasants were wearing in medieval times and the bishops and the lady of the house”. At the age of twelve Aunt Dodo, who was into clothes, gave Sarah her first subscription to Vogue. Her interest for fashion was supported by her readiness to read her parents’ paper, the Daily Telegraph, which contained “reports on the haute couture shows that were sketched, as journalists were not allowed to take pictures in those days”.

Sarah went to the University Leeds to study for a degree in Art History and English. “This was during the punk new wave times and you could not be seen dead with a fashion magazine. I would get up very early and buy Vogue during a time of existential crisis and to distract myself from the finals”, Sarah explained to students. It was during her final year that Sarah was a finalist in the prestigious Vogue Talent Contest but the finalist lunch at Vogue House coincided with her final university exam. Sarah travelled to London accompanied by a member of the university team to allow her to both attend the final of the Vogue Talent Contest and sit the exam the next day.

Despite not winning the competition, she began her career at Ms London magazine which provided Sarah an excellent opportunity to hone her writing skills. She goes on to explain how “the benefit of working in a smaller place is you learn the functions of what everyone does”, Sarah “was able to write a page a week”, an experience she may not have had if she had won the Vogue Talent Contest.

The Digitalisation of the Fashion Industry

This was followed by an inflection point in the industry with the wider use of the internet becoming prominent in the fashion industry. This saw Sarah hold a new position at Style.com, and more broadly prompted the emergence of the London Fashion Week fashion scene, as designers were now able to gain press coverage without having to travel to Paris.

It was not only the fashion scene that changed but the capacity and role of the fashion writer. Sarah’s own “writing style evolved up until 3 o’clock in the morning, after attending five shows and writing reviews after them”. Previously, fashion reporting had been looking at the zeitgeist, drawing conclusions from wider industry perspectives and writing a long form piece. A style which Sarah thinks should still happen, as people do not get the opportunity to look and analyse in the same way today. “Any specialist has to be able to think, how do I get across all the information, what is important about what I have just seen, what is the context and would the average person interested in culture get something out of that, all in three hundred words”. “The first sentence is the most important and takes the longest”. The consciousness of being able to condense things into compelling description, and being able to filter out extraneous parts is one of my bench marks”.

For those looking to get into fashion journalism Sarah explains the necessity to have a specialism and your own voice,  “it is really important,” she explains. “Young people and young designers think differently” and this innovation in thought is what will drive the industry forward. “What is your point of view? What do you have to say about it?  What do you see? When someone has done their research and not just throwing about what people have said, that is what makes me respect a writer”.

When asked about the best way to gain editorial experience, Sarah said “pitch ideas”, rejection is inevitable and in these moments it is important to “shut down your screen and do something creative, write for yourself and that is a way to work through your problems”. The thing to realise is that most creative people are freelance”.

Supporting the next generation

Alongside her career as a fashion journalist Sarah has developed a keen eye for spotting the next generation of talent. More than this, this has led to a passion for supporting new talent  to reach their full potential. It seems a natural fit that Sarah has been the British Fashion Council’s Ambassador for Emerging Talent since 2009. Her prolific support for young British designers has been behind the rise of talents such as Christopher Kane, Erdem, Mary Katrantzou, JW Anderson, Jonathan Saunders and Simone Rocha. It is therefore not surprising that Sarah reflects on her current profession as a “mentor” and no longer necessarily views herself as a journalist.

When asked what her motivation was behind this work Sarah explained “it is sheer curiosity and wanting to know what people are thinking”. The next generation are pushing the trends and they are the ones who are setting the agenda, for example sustainability. “I am looking now to learn from new people, new pockets and ways of doing things that excite me. Communities of people are not just necessarily about the genius individual, who is around them, how they communicate and what they have to say”.

Sarah was awarded an MBE in 2011 and is involved in fashion education, guided by the concern that talent from every background must have the chance to participate in the industry.