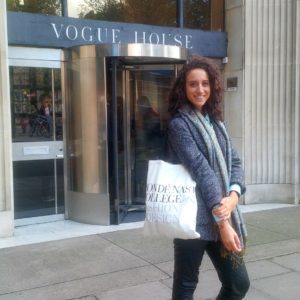 CNC graduate and now digital editor at ELLE, Italia Federica Caiazzo shares her experience about how she got her internship at British Vogue following the Vogue Fashion Certificate course.

When I graduated from Condé Nast College in December 2016, the best (well, the hardest) was yet to come. I had no job in fashion media waiting for me outside, but I had my Vogue Fashion Certificate and my previous BA and MA in foreign languages: I kept telling myself I could make it. I had been previously booked at Hunter Boots for a 2-week unpaid internship in PR starting in January but, other than that, I only had my temporary job in Selfridges where I was sure I would spend my Christmas too. Well, Santa Claus might have come earlier that year…

I was standing on the lower ground floor, where I used to work as an information host when a woman approached me and asked me where the contemporary fashion department had been moved to. “Upstairs, Madam. Third floor!”, I replied. As soon as she stepped away from me, I recognized her face and immediately stopped her saying: “Excuse me, Madam. Aren’t you Frances Bentley?”. “Indeed, I am”, she replied. Well, I felt immediately overwhelmed with joy and emotion: the Managing Editor of British VOGUE was standing in front of me. I had no escape, I had to keep talking because I had interrupted her shopping moment. “I am a graduate from the Condé Nast College – I said – I attended your lecture two weeks ago and I found it incredibly inspiring!”. I remember I also felt weird but, in the end, I was all but weird: she immediately smiled and became interested in my story by asking me “And what are you doing here?”. Good question! What was I doing there? Standing to give information to customers who were terribly stressed with their Christmas shopping and struggling to pay my rent at the end of the month: this would have made a perfect and honest answer. However, I heard myself saying: “Well, I am getting some experience in luxury retail while applying for internships in magazines”. I didn’t mention anything about the fact that I had already applied for a work experience at British Vogue and had had no answer yet. I wanted that to be a normal chat and not a chance to beg for an internship. Overall, Frances Bentley was very kind, gave me some general tips for a very quick conversation and I let her go. That moment changed my life.

When I went home that night, the first thing I did was working on my cover letter again and writing an email to follow up that fortunate encounter. I had had a huge number of lessons about career etiquette at the college and knew I was doing nothing wrong. All I had to do was being kind and polite. Therefore, I wrote my email to Frances Bentley, told her it had been a great pleasure to meet her in Selfridges and that I wanted to apply for the work placement at British Vogue again (CV and cover letter in attachment, of course). The day after she replied my email and I was called by her former editorial assistant Elizabeth White to arrange an interview. That was the most extraordinary Christmas in all my life and I would never forget it: one day I was working in Selfridges giving information and the day after I had an interview arranged at British Vogue.

What I want to say is that studying at Condé Nast College means much more than attending classes. Being a Condé Nast College graduate means you become part of a huge family and, most of the times, people of the industry are willing to open their arms and hug you whenever you say you have studied here. I am not saying that the college gave me direct access to my internship at British Vogue, not at all.I had to show my character and abilities during my interview with the managing editor, of course. And I was certainly brave enough to push myself beyond my limits and approach Frances Bentley while she was shopping in Selfridges. But if you mix your determination with what you learn from CNC as well as a bit of self-confidence, I am sure there will be a great chance for you to find your voice. I found mine when I spoke up and introduced myself. That’s how you break into this very hard industry: never be afraid of introducing yourself and be proud of being a CNC graduate.

Find out more about the Careers in Fashion and Media Industries