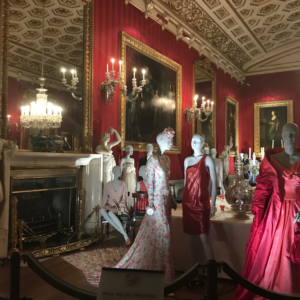 No, I’m not actually wearing the Duchess of Cambridge, Kate Middleton’s smart Jimmy Choo pumps or even her thoroughly mudded-up wellies. In this piece, at least, I’m referring to a different Duchess…make that several.

The women (and men) of Chatsworth House – the Dukes and Duchesses of Devonshire – and their ancestors could be compared to…well, nobody. The trendy Kardashians? That would be an insult, no explanation needed. Perhaps the Vanderbilts, although even with Gloria Vanderbilt’s fashion prowess and Anderson Cooper’s silver fox vibes, they don’t quite add up to the splendour of Chatsworth.

Just a fraction of that splendour is now on display at Chatsworth House through October of this year, combining the fashion, jewelery, textiles and craftsmanship that give the Cavendish name such grandeur. Curated by International Editor-at-Large of American Vogue, Hamish Bowles, with creative direction by famed fashion exhibition organizers Patrick Kinmonth and Antonio Monfreda, House Style captures the complex essence of the Cavendish legacy: a rare dual appreciation for both the traditional and the cutting-edge.

The couture collection ranges from the 16th century with Bess of Hardwick to that of today’s Stella Tennant. Of course, Georgiana, the Empress of Fashion of the 18th century couldn’t be left out, nor could Adele Astaire, also known as the sister and dance partner of Fred Astaire.

From the start, the exhibition is clearly not just about dresses from the olden days (although with Georgiana’s taste, that might be something to see). Upon walking into the Painted Hall, you’re greeted by a black Alexander McQueen frock that Stella Tennant wore on her first photo shoot: ultra-modern, ultra-sexy. You’re then guided by several coronation robes worn by the attendees of each event, as well as the wedding gowns of the family up to Stella’s short and sultry Helmut Lang creation.

What is so remarkable about House Style is the evolution of style throughout the centuries, not only appreciating the far-off past but giving a well-deserved nod to the contemporary fashions that are so often overlooked in similar exhibitions. The collection combines traditionalism and Victorian intricacy with feminine modernity and power – even in the very early pieces. Each piece evokes the Zeitgeist of its time in history while also displaying the common theme of enthusiasm for fine fashion.

Craftsmanship abounds at Chatsworth, not just in the clothes but in the jewels, the furniture, and even the carvings of wood and stone in the house, itself (perhaps that is why it was chosen as Mr. Darcy’s house in the film adaptation of Pride & Prejudice). Early and mid-century haute couture from Jean Philippe Worth and Christian Dior set the standard high for other featured designers like Vivienne Westwood and Christopher Kane. Georgiana, a dear friend of Queen Marie Antoinette, had an incredibly decadent and romantic style that inspired John Galliano in his Dior days to create a dramatic light aqua gown found in the Sketch Gallery of the house. If Instagram had existed in those days, Georgiana’s style would overshadow today’s social supermodels with every post.

The Devonshire House Ball, held yearly from 1897 to 1919 showed the family’s pure love of clothing and costume. Despite the black and white photos of the events, the gowns featured in the exhibition are breathtakingly ornate and vibrant, pieces so well-crafted and beautiful that only in-person visuals will satisfy.

Perhaps the grandest room in the house is the dining parlour, where more than thirty dresses by Oscar de la Renta, Karl Lagerfeld for Chanel, Vetements and others surround a massive table that could easily seat over thirty guests. Members would always dress to the nines for family dinners, with good reason. The room is floor-to-ceiling decadence, entwining Old World aristocracy-chic to modern day mavens of style. It’s only natural that the family would want to pay homage to their surroundings by dressing the part.

The Cavendish family not only had an excellent sense of style; they had a remarkable sense of humor. Slippers with Elvis’s face printed on each shoe – worn by owners of original Dior couture, no less – are only part of the irony. Embroidered jumpers from the eleventh Duke’s hunting collection were a personal favorite. Phrases like “Life’s a bitch and then you die,” “Never marry a Mitford,” and “Just stop talking about yourself” showed the Duke’s eccentric, trendsetting prowess – the sweaters would no doubt fit in perfectly with today’s graphic letter tees and cleverly unapologetic slogans.

Ultimately, House Style reflects cultural values that we’re either obsessed with or are sorely lacking today. Wealth, status and beauty abound in the ever-fleeting and image-based worlds of Instagram and Snapchat. True originality and craftsmanship, however, have no replacements, certainly not by the fast fashion now demanded by so many. Perhaps what sets apart the Cavendish family from the rest of society is not wealth or prestige, but an unwavering appreciation for what makes life extraordinary: extraordinary fashion.

House Style will be on display until October 22, 2017 at Chatsworth House in Derbyshire.