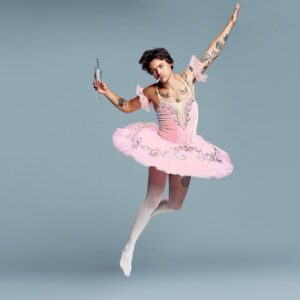 After Harry Styles’ Coachella set, where he brought out none other than Shania Twain, the British pop star has further cemented his status as a cultural icon. From the artistically crafted As It Was music video, featuring the adorable voice recording of his goddaughter, to the way he interacted with models in the Watermelon Sugar music video, Harry Styles encapsulates the concept of someone who has been ‘written by a woman’. MA student Nisha-Paris Murria reports

Having hosted the Met Gala with Lady Gaga in 2019, Styles’ fashion has often been a talking point of the media. Yet, when Styles wore a custom-made Gucci dress and double-breasted jacket on the December 2020 cover of Vogue, it sparked a conversation about masculinity.

His style has always been of an extroverted nature, however, since leaving One Direction, Styles has taken the opportunity to hone into his fluid personality. Styles has been a trailblazer in this sense as he has not placed himself inside of a box, be it music or fashion. In an interview with L’Officiel, Styles shared his opinion on changes in the creative climate, discussing that “many borders are falling – in fashion, but also in music, film and art… I don’t think people are still looking for this gender differentiation”.

The star has also addressed breaking traditional stereotypes of masculinity in a 2018 interview with Timothée Chalamet, arguing that “there’s so much masculinity in being vulnerable and allowing yourself to be feminine.” However, Styles’ androgenous style and personality has received backlash over the years, including criticism of his infamous Vogue cover. The historic cover, for which Styles became the first man ever to grace the cover of Vogue, was criticised by actor Billie Porter. In an interview in 2020, Porter, who is known for his bold gender fluid style, expressed “I created the conversation (about non-binary fashion) and yet Vogue put Harry Styles, a straight white man, in a dress on their cover for the first time.”

While many men like Porter have tried to bridge a gap between effeminacy and gender fluidity, Styles appears to have approached this effortlessly as he continues to educate himself and express himself brazenly. In 2022, shouldn’t we also be more inclined into encouraging people to dress how they want to/ when they want to without the notion of ‘labels’?

Fashion, like music, theatre and film, is an expression of art and should be loved by everyone regardless of your gender or sexuality. The way I see it, clothes are subtle symbols of who you are as a person, they should not have an ideological label attached to pieces. In this way, clothes should not dictate your gender – society must stop perpetrating  these traditional stereotypes as this view is not the Sign of the Times anymore.

Androgyny has been a fashionable movement for lots of celebrities such as Annie Lenox, Boy George, David Bowie and Prince to name a few. However, they were always met with criticism. Contemporaries like Prince and David Bowie showed a generation of people that it was okay to express yourself through fashion, to mix gendered clothing and personal style to create a visual representation of oneself.

Through celebrity icons such as Bowie and Prince, rebellion and challenging of gender stereotypes were encouraged. Yet they were still wary of what sort of image they were trying to convey to the world. Fast forward to 2022 and people are less concerned with labels and increase in gender-fluid fashion is prominent.

Harry Styles is now taking the charge from his predecessors in leading the conversation, disbanding the traditional ideologies of the past and developing an open attitude to music and fashion; this is why he is a national treasure and a cultural icon to anyone who follows him.

With an ever changing climate surrounding gender norms, if there is one lesson we can learn from Harry Styles it is to embrace your true self. Use fashion as a fun tool of expression and be free to be yourself.