Hamish Bowles talks about his “Joie de vivre”, his insatiable curiosity, being a collector of couture, and his own world of interiors 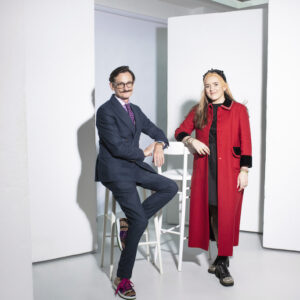 Hamish has worked for Condé Nast for over thirty years and is recognised as one of the most respected voices in the world of fashion and interior design. He entered the Vogue Talent Contest aged 14, where he received a special commendation and was invited to meet the Vogue editors. From here, he began his career at Harpers & Queen magazine in 1984 working as Fashion Editor, rising to Style Director in 1989.

After beginning as Vogue’s Style Editor in 1992, Hamish was promoted to European Editor at Large in 1995 and to International Editor at Large in 2011. His current role includes overseeing all interior design features, writing profile stories, and covering fashion and contemporary culture, as well as the history of fashion and style, for both the magazine and vogue.com

“I discovered you could find things at jumble sales if you were small enough to get through the sharp-elbowed old ladies”.

Tracing back to the beginning of his career as a very young boy, Hamish was enthralled in costume and costume history. He spent long hours at the Victoria and Albert Museum and exploring the country including going to the Fashion Museum, Bath and Castle Howard which housed 18th-century costumes. The clothes were expressive of a period and moment in time that told so much about the life that was led in them.

In the early 1970s, Hamish began collecting costume. This was an exciting time for fashion in Britain. Innovative designers like Zandra Rhodes, Ossie Clark, and Bill Gibb were reacting to the harsh economic and political climate.  Designer Antony Price was also producing wonderful, nostalgic clothes which contributed to his passion for costume history. His deep immersion in fashion took him directly to  the pages of British Vogue which brought this world to life.

“I thought magazines could be interesting, but I was also very interested in costume design”.

By the end of the eighties Hamish  started writing more, and he realised he was more  interested in the people that made and shaped fashion so he began profiling couture clients, entering into their environments and lifestyle, which subsequently drew him more to interiors.

Hamish obviously has a passion for interior design,  which has been a significant part of both his professional and personal life. His flare for interiors evolved into styled features on the pages of Vogue. So it is a  natural progression for Hamish to be appointed as Editor-in-Chief of the World of Interiors.

“You can’t separate costume and fashion from the history of architecture and interior design”.

Vogue is a brand that has evolved beyond the print title. It is a product, VIP experience, creative consultancy and voice of authority,  operating fluidly across a range of media channels. The eruption of the internet allows for a more nimble and diverse approach to content creation. Hamish’s role has expanded. The increase in Vogue touch points runs complementary to the print edition as a way to add to stories.

A quest for discovery

A genuine quest for discovery will take you out of your comfort zone, and this requires openness. “You just have that electric moment when you can see someone that’s taken exactly what everyone is working with, but taken to a different place”.

For instance, Isabella Blow directed Hamish to a designer that he missed at the Central St. Martin’s final exhibition showcase, this insatiable curiosity led him to Alexander (Lee) McQueen, a diamond in the rough, a colossal talent with a fearless voice…the rest is history.

“You need to be really attuned to the zeitgeist from politics to performance, music, celebrity, and communication. Definitely being acutely sensitive to what’s happening globally and in emerging markets, and the different kinds of worlds that are out there, and how they can feed into and complement what you’re doing”.